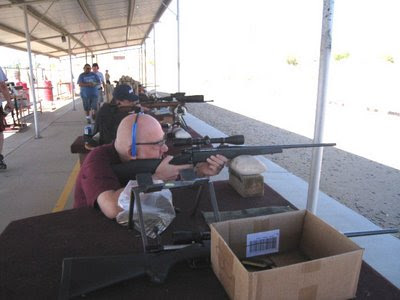 Shooting the Vanguard with Sensgard Hearing

At my request I received a Weatherby Vanguard rifle in the 30-06 caliber which I consider the best all around caliber baring none. The Vanguard comes in a verity of calibers from the 204 to the 338 Win magnum so there is something for everyone. They offer it in the 300 Win & Weatherby mags as well as the 7mm Remington mag all which are proven hunting rounds. The 7 mm 08 and one of my all time favorites the 22-250 are also on the list. There are 120 caliber/model combinations from $399 to $931 advertised prices so you would have a hard time not finding something to suit your needs. They offer stainless versions, youth models, varmint and SUB MOA models. Of course some of them will go over the $399 price tag. You can hunt anything from groundhogs to large bear with the wide caliber selection. As an example the 338 is great for anything that walks in North America and much of Africa. Recently at a writers’ conference I shot one in the 257 Weatherby mag which while impressed me that caliber is somewhat specialized and factory ammo would be very pricey. I wanted a caliber for the average hunter to relate to. If I want a good long range antelope rifle the 257 would get serious consideration. A good friend of mine uses the 257 on antelope and really likes it as he has tagged a couple at 400 yards or so. I chose the 30-06 because of its effectiveness and ammo availability and pricing. With the cost of everything going up I want to show hunters a good low price rifle and a practical caliber for them to use. For a one rifle hunter the 30-06 is the best all around caliber in my view. At an advertised price of $399.00 it would be affordable to almost any one wanting to buy a quality rifle. 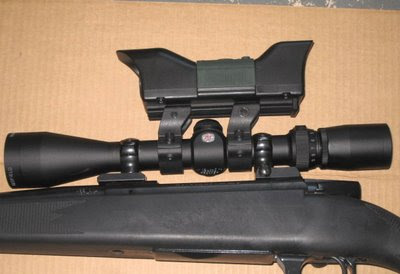 
It came with the black synthetic stock which I consider more practical for hunting then wood. While wood looks better it is subject to the elements. It might swell during a rain storm which would change the -0- plus it can be scratched or broken during a fall. Without much doubt the synthetic stock helps keep the price down. The barrel is nicely blued but not shiny which is a plus. Any glint spotted by a deer will spook them to the next county. A factory target came with it showing a 3 shot group at 100 yards a little less then an inch. They used a 150 grain bullet but there were no other specifications. They are the only rifle in that price range that provides a target as far as I know. There is a lot of competition out there for low price rifles and any little thing that can be provided might give one brand a leg up on another. I have shot several brands and for the most part they are well made and provide good value for the dollar. It might be one feature that one has over another that might sway the buyer. A factory target is a novel and appreciated feature in my view as you know that you are getting an accurate rifle. There are no sights provided which isn’t a problem since everyone uses a scope these days. Not a big deal but I feel that they could provide scope bases with the rifle. The owners manual and trigger lock came with it as is the usual case. The barrel is 22” which is adequate for the 30-06 though the magnums should have a 24” for best results. 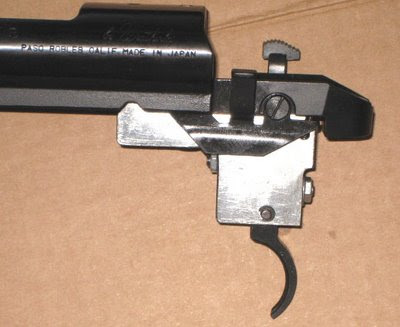 
The bolt head has 2 large locking lugs with visible gas escape ports in the unlikely event of a case rupture. It gives you confidence that you are shooting a strong and safe rifle that has the ability to protect you in the event of an ammo mishap. That doesn’t mean that you go crazy on the loading bench. It has a plunger ejector and a good looking extractor. It has a magazine release enabling the shooter to drop ammo through the bottom. While some might like that feature I don’t consider it a big deal but that is my personal thought. It is a bit hard to open which is a plus because if it was easy it might dump your ammo out at an inopportune time. The safety is a two position type and the S & F are very prominently marked which is a very good feature. The trigger on my sample was a joy breaking like glass and set at 2 & ¾ lbs. Such a good trigger enables you to shoot good groups per the rifles ability. I did not attempt to adjust it as that wasn’t a necessary task. I took the rifle apart and didn’t see any tool or rough marks that would indicate poor quality control. Everything fit well and looked like it belonged there. The rifle weighs about 8 lbs before mounting the scope. For me that is a bit heavy for carrying as my running gear isn’t the best weighing 8 & 1/2 lbs with scope. For bench rest shooting and out of a blind that extra weight would come in handy. That is a good reason to buy an extra rifle. You need one for carrying weighing around 6 & ½ lbs and a heavier one for shooting out of a blind or bench rest shooting. Believe me 2 lbs makes a difference at least to me. At the Vanguard prices you can probably afford two. To look at all the available calibers and options just go to the Weatherby website. 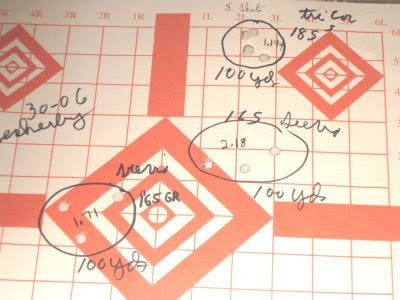 The Weatherby brand has been around since 1945 and they wisely the brought out the Vanguard about 20 years ago. As a note I had one in wood about 10 years ago and it was a beauty. Some hunters just don’t have nor want to spend a lot of money on a fancy rifle. The Mark V and it variations have a lot of shine and glitz but that doesn’t appeal to a lot of hunters including me. I have shot them and if you like them then you can’t go wrong with one. They do shoot well and are chambered in cartridges that can take a T-Rex. The low cost quality rifle isn’t a new idea. Remington came out with the 721 and 722 many years ago and dollar for dollar they were one of the best. I have a couple and they are great shooters despite their plain looks. Who can forget the 788? Weatherby brought out their version and it is a worthwhile addition to any hunters’ rifle collection. 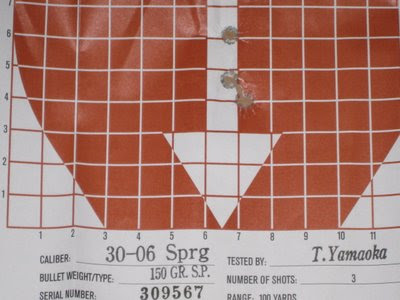 
I mounted a Redfield 3 X 9 Tracker with Redfield bases and rings which I had on hand. Shooting it at a hundred yards revealed that it likes some bullets better then others. Anybody that has any experience shooting rifles has observed that phenomenon. It is very rare that a rifle will shoot everything the same which shows that you have to work up the load for your particular rifle. If you don’t reload then you might have to try several brands and types to get the desired results. The Remington 180’s were the most accurate grouping just under an inch on average. The 185 grain Tri/Cors and the 125’s were close seconds averaging just around an inch. Surprisingly the Sierra 165 grain Game Kings were the least accurate in this test averaging around 1 & ¾”. I shot quite a few loads and most went from about ¾” to 2” groups depending on load. The factory provides a target in this instance showing a good group with 150 grain bullets. There are so many bullets and loads out there for the 30-06 that I have no doubt those groups can be shrunk a little with this rifle with some load development. Without a doubt some commercial loads will do as well. Keep in mind most rifles including this one will outshoot their owners especially from a hunting position. Most of these groups are good enough to anchor an animal at 300 yards or so, keeping in mind that most animals are shot within 200 yards or less. Shooting this rifle off the bench was a pleasure because of the weight recoil was mild. The good trigger pull helped also. I did notice that you had to be careful how you put them in the magazine to get reliable feeding. They had to be put in just right or sometimes two would come out instead of one. With more load development I plan on checking that out some more in case I was doing something. I will take this rifle on future deer hunts where I don’t have to carry it very far as it is a quality product. For someone contemplating buying a low cost quality rifle I would suggest that you give this one serious consideration. 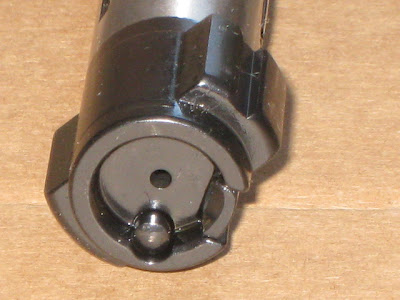 Bob Shell
Posted by Bob Shell at 7:47 AM

Bob,
Thanks for your informative info.
I just finished hunting elk with the Vanguard 30.06. I got an elk at 275 yards.
The problem I have with the gun is the cheaply made magazine. It got stuck in my gun and it is so flimsy. I want to replace it with something sturdier. any suggestions?

thanks and Happy Thanksgiving Dennis

very nice post thanks for sharing it.
Best Rifles in Australia