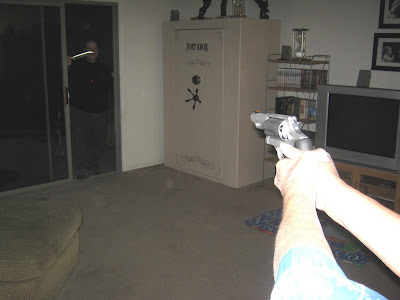 What the Judge was meant for

Every once in awhile a novel handgun comes along that can grab your attention. The Judge is such an item. This five shot revolver chambers either a 45 Colt or 2 & ½’ 410 gauge shot shell. Some models will chamber the longer 3” round. My gun weighs in at 32 oz empty which is fairly light. Crimson Trace Laser Grips also came with it adding to its utility. Taurus makes various models some stainless such as mine or blue. There are a few barrel lengths and one model which is hammerless for pulling out of a pocket quicker. Before I bought that one I would make sure I could handle the double action only trigger. They even have a rifle version called the Circuit Judge. For more information on Taurus products go to http://www.taurususa.com/ Kristin Hunt who represents Chevalier Advertising was kind enough to send a Judge for testing for this article for more info go to http://www.chevalier-adv.com/ for a list of their clients. 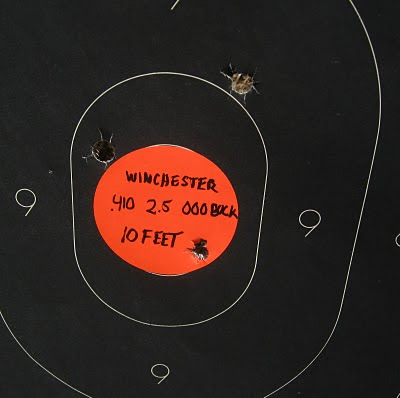 The Judge is primarily meant for self defense against critters both two and four legged. It isn’t a long range target gun or a particularly good gun for big game hunting. It could however serve as a backup with the proper loads. The 410 loads are good to 10 feet or so with regular shot. After that the rifling spreads it quite a bit, hence causing it to lose effectiveness. You can use buckshot or a slug to extend the range some but the 45 Colt will reach out as far as you would need to shoot in self defense. The sights are rudimentary with no adjustment on the rear. The front sight is an orange fiber optic and is easy to pick up even in fairly bad light. The double action trigger is pretty heavy and may cause a woman or someone with weak hands a problem. That was the only thing that I didn’t like about the gun. It is easy to cock and shoot as a single action piece with the trigger being much lighter breaking at 5 &1/2 LBS per my trigger pull gauge.. Like many of the Taurus guns it is made in Brazil. The fit and finish seem to be good which I have observed on other Taurus products. We shot over 300 rounds of varying types of ammo and there were no malfunctions of any kind which is vital in a self defense gun. The Crimson Trace grips work well as I have experienced with other products made by this company. Shooting with the Crimson Trace grips is a comfortable experience. Just for the hell of it I carry it in my pocket and it is comfortable and doesn’t weigh me down. One thing I like about the Crimson Trace grips is when you hold the gun they automatically go on. There is no thought process needed which is vital in a serious social situation. For more info on these great grips go to http://www.crimsontrace.com/ for a list of their products. 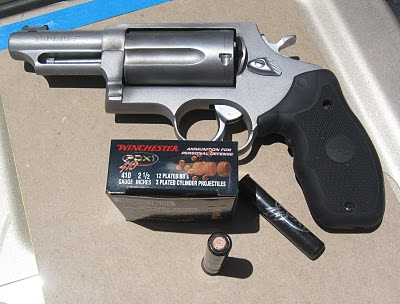 The Judge that was used for testing

As I stated you can shoot various types of 410 and 45 Colt ammo. I don’t recommend plus P loads as the recoil would be excessive and would wear out the gun a lot faster then regular loads. That would be especially true with heavy bullets in the 300 grain range loaded hot. The 45 Colt is a pretty effective self defense load even with regular bullets. The 45 caliber bullet doesn’t have to expand to be effective as it makes a large entrance hole. For my money I will carry a light hollow point in mine maybe mixed with a couple of shot shells but that can change per the situation. If I expect to encounter snakes then I will use shot loads only. I took some 45 auto 185 grain Remington HP’S and put a cannelure on them. That way I can crimp them in the Colt cases. The lightweight bullet can be driven relatively high velocities without excessive recoil or pressure. With the many types of ammo available in both 45 and 410 a shooter can cook up any combo that will suit him. You should be able to solve your social situation with the five shots provided with the Judge.

The button load by Winchester is very effective

We tried a couple of loads offhand at 11 yards and they grouped but not in the accuracy category. That would have a lot to do with the distance the bullet has to travel before engaging the rifling. Any gun with a lot of freebore will suffer in the accuracy dept. The loads were 7 X Herco & a 250 grain cast and 12 X Herco with a 185 grain Remington HP. Since this bullet is meant for 45 autos I put a cannelure on it to enable me to crimp it. We shot 5 rounds of Federal 410 with # 4 shot that is listed for handguns. There were a few hits but not nearly enough to be effective. It seems difficult to locate factory 45 Colt ammo of any kind. I tried some local stores to no avail, sure glad that I handload which solves that problem. If you are willing to search a bit then you will eventfully find some 45 Colt ammo. 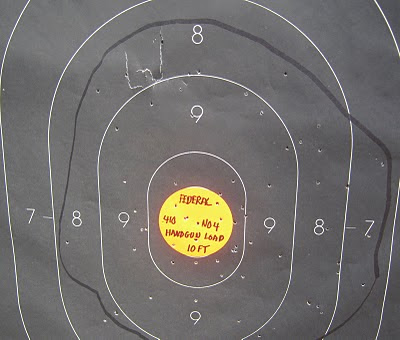 I did some measuring and found that the openings at the front of the cylinder measured .462 which is one explanation as to why 452 diameter bullets won’t be real accurate. In fact you can drop a 458 diameter bullet through the cylinder without a problem. That gave me an idea as I have on hand some 458 diameter 300 grain hollow base bullets on hand. I loaded them with 7 X Herco and they chambered without any problems. You have to understand that the cylinder has to accommodate the 410 shot shell which makes it more versatile but less accurate. There is a .010 slop between the bullet and cylinder which caused the bullet to tilt a little and when it engages the rifling it might be at an angle. That, my friends isn’t conducive to accuracy. Some of the bullets showed signs of keyholing at 25 yards. I believe that the 458 diameter bullet will help out as there is only .004 slop. I tried to chamber a 454 Casull round but thankfully it wouldn’t go all the way in. I have no doubt that if you fired a 454 in the Judge it would be totally destroyed. I also loaded some 45 Colt cases with the Speer shot capsules to compare the effectiveness of them against the 410 loads. They contain 140 grains of shot ahead of 10 X Green Dot. If for some reason you don’t want to use 410 loads this might be a viable option. I loaded some ammo of various types and here are the results. Actually this weapon is relatively flexible especially for those of us who handload. 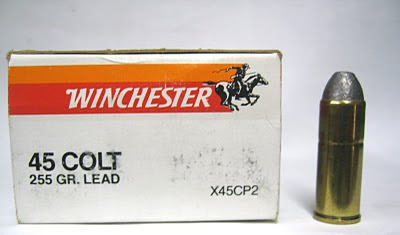 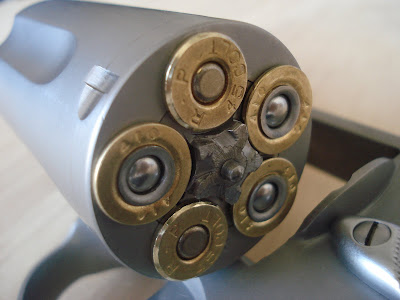 
We tried some accuracy tests at 7 yards and they all did pretty good giving groups in the 2 to 4” range. That included the 125 grain X-Ploder, 185 grain HP, 250 grain cast and the 300 grain HB. However when we moved back to 25 yards accuracy went to pot. All of the bullets showed signs of keyholing except the 300 grain. It showed fairly decent accuracy. Careful shooting will produce groups in the 3 to 4” range with the 300 grain at 25 yards. That was something I expected. So if you want decent accuracy at longer ranges the 458 diameter rifle bullets seem the way to go. Also Hornady makes a soft lead bullet at 454 in diameter that seems to work ok. It is intended for the black powder Colts but can be used for other things as well. Trying the shot capsules showed that they are as effective or more so then the 410 shot shells in spite of the fact that they have about ½ of the amount of shot. The reason is the capsule holds the shot together longer, hence better patterns. At 3 yards both types of shot shells completely penetrated ½’ of drywall and lodged into the plywood board in back of it. That should be effective against an antagonist at close range. We shot some Winchester factory 1/5oz slugs. At 7 yards they were very accurate but at 25 they opened up to such a degree that I wouldn’t use them for longer range self defense. Personally I regard a 410 slug pretty much useless for anything as it lacks serious accuracy or weight. It weighs 90 grains and at 1200 fps it doesn’t impress me. The only thing that shoots well at 25 yards is the oversize bullets. However lets be fair and honest the gun is designed for close range self defense and all loads tested were accurate enough at that range to work. The sights, which are easy to pick up, aren’t conducive to longer range accuracy. They are non adjustable and the front sight, orange fiber optic, is rather large and thick which helps in a social situation. We shot some #3 buck which has 3 balls. At 10 feet anyone who is unfortunate enough to get shot with that will be put down and at 21 feet the buck was still pretty tight. We tried the Winchester which has three copper colored buttons plus 12 pieces of plated bird shot meant especially for the Judge. They gave great performance at both 10 and 21 feet. That might be one of the best loads for the Judge. The 410 loads designed for a handgun generally performed well and would be a good place to start when looking for self defense ammo. 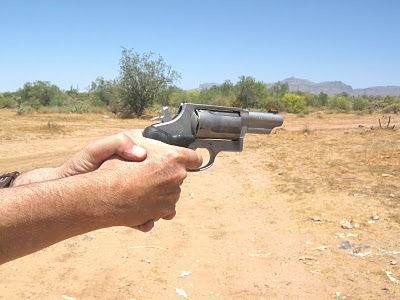 I had several people try the Judge to get different opinions of its handling feel and other features that they may or may not like. For the most part the Judge was well received and one shooter plans on buying one for himself as a result of shooting it. For a close range self defense situation it should do well with the proper ammo. I would recommend it for self defense but would recommend that the buyer tries different types of ammo to see what works best for him or her. Also like any other handgun meant for self defense I recommend that you take it to the range to get well acquainted with its features and handling characteristics. It would be a great hiking gun in snake country and you can carry bullets as defense against coyotes and mountain lions. I will be carrying it for some of my self defense needs in the future. For what it’s designed for I give the Judge a thumbs up. 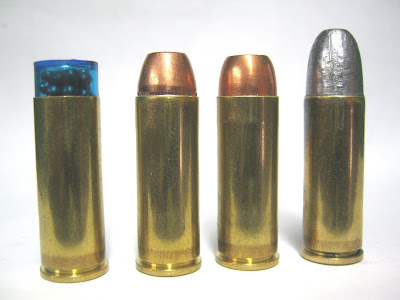 A few of the types of ammo available for the Judge
Posted by Bob Shell at 9:37 AM

Anyone can test a pistol with some factory rounds, but you always think outside the box. Lets push the pistol past what others have done and try something new and that makes good reading.

Hmm anonymous perhaps you could help me?