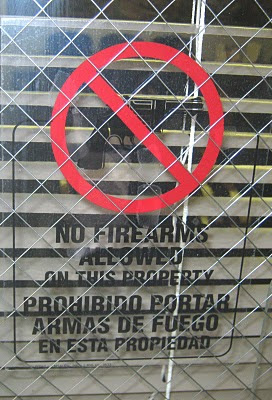 The reason for this article is to show the public places of business and Government agencies who don’t allow law abiding citizens to carry weapons in these venues. Their argument is that weapons cause violence which is of course unmitigated nonsense. Weapons don’t cause anything but bad people do. So why do these people put up signs banning the carrying of weapons. One reason is THEY don’t like guns so no one else should according to them. The other and perhaps main reason is the various businesses and Government agencies don’t trust law abiding citizens to protect themselves and their families. Maybe they think that a gun transforms a law abiding citizen into some sort of psychopath by merely possessing a firearm. Of course that’s nonsense but you can’t reason with these types of people. You can correctly point out that more people then ever are buying guns but the crime rate is going down according to the FBI statistics. Facts and logic don’t faze them in the least. You can point out that gun free zones are just killing areas for some psycho with a grudge against society for a grievance real or imagined. Logic is left at the door when dealing with these people. So how do you deal with these people?

If they hold political office then you simply vote them out. If they can’t trust law abiding citizens to posses or carry firearms then why should we trust them with our future? If they are wrong on the firearms issue chances are that they will be wrong on other issues such as taxes and the economy. Many times they are soft on crime but hard on law abiding citizens. Such people don’t deserve to hold any office. If you look at the states with the most restrictive gun laws chances are they have high tax rates and are broke and looking for more ways to tax the populace and take away more of their rights. So the simple, though not easy solution is to vote them out and put statesmen in instead of political hacks.

One glaring and unjust ban is in the military. I find it amazing that out men and women in uniform can be trusted with various implements of war overseas but the minute they return to the US that trust is suddenly gone. They are not allowed to carry weapons on US bases and there are other restrictions as to where they can and can not posses a gun. That my friends is a sad state of affairs. This was put in place by President Clinton in the 1990’s who by the way was a draft dodger and disliked the military and guns in general. Then we have this nit-wit Janet Napolitano, our esteemed Homeland Security Chief make a remark that returning veterans are a menace to society. HOW DARE SHE? She is a perfect example of an incompetent moron who got promoted. These people volunteered to serve our country and risk life and limb in doing so. They should be honored not reviled. I wonder how many lives would have been saved at Fort Hood if a serviceman or woman was armed and could have put down that nut job sooner rather then later.

Other Government agencies don’t allow weapons into their facilities which makes it easier for the bad guys to tally up a body count. Until 9/11 pilots were not trusted to carry a firearm on board. They are trusted to fly a 30 million dollar jet full of fuel and passengers but not trusted to carry a 38 on board. I find that logic amazing. They can now but it’s a burdensome process and I heard that you can get clearance to nuclear weapon secrets easier then be allowed to carry a gun on board a jet.

Businesses have to be dealt with in a different way. When you see a sign on their door prohibiting weapons the best thing to do is turn around and spend your money elsewhere. Then notify the management and corporate office that if they don’t trust you with a weapon then why should you trust your and your family’s safety to their place of business. There are national chains such as Target and Outback and Red Robin Resteraunts who don’t allow guns on their premises but Wal Mart and many restaurants do. Guess where I am going to spend my money. Anti gun businesses will state that they have a right to prohibit weapons on their premises. Perhaps they are right but we have a right not to shop there. If enough people boycott those places of business then it will hurt them in the pocketbook which should get their attention. Those businesses that prohibit weapons can’t nor won’t guarantee your safety. If they have security they are also unarmed. Shopping malls make excellent killing fields as they prohibit weapons in most cases. Mall security is also not armed so if a shooter comes in I guess they can call 911. Hmm so can most of the shoppers as almost everyone has cell phones. So what good is mall security?

Most schools and colleges prohibit weapons by anyone. Hmmm for some reason the bad guys don’t read the signs so if they decide to shoot up a school there is no one to stop them. But the insanity goes even farther. There have been examples of kindergarten kids being suspended merely for pointing their finger at another kid and saying bang. Other ridicules incidents involve a kid bringing in a plastic fork or knife to eat his lunch. This is not -0- tolerance but mass insanity in the education system. I wonder how many lives would be saved if they taught a gun safety course in all schools. The chances of that happening are about like a snowballs chance in hell. How about training and arming some of the teachers? Small chance there as that makes too much sense! After all it’s the evil guns that are the problem not the evil people. Don’t you know that guns have evil personalities, if you don’t believe me ask some of those wack jobs that make these rules.

So what has gun free zones gotten us? To just name a few how about Luby’s cafeteria, Columbine, Virginia Tec, various McDonalds restaurants among others. I could name a bunch more but you get the idea. It also got us 9/11 because if the pilots had guns the terrorists couldn’t have hijacked the planes with box cutters. So what do the wack jobs say about that? Stricter regulations on guns! Dr. Savage states that liberalism is a mental disorder and this is proof positive that he is correct. If you keep trying the same thing over and over and expect different results then you have a form of insanity.

So what do law abiding gun owners do when confronted by anti gun wackos. Since you can’t reason with them just walk away. No sense getting upset over something that you can’t control. What you can control is at the ballot box on Election Day. Let those politicians who would take your guns know that you will be voting against them and you will also spread the word. Maybe someone who is running for a large office won’t care but the locals know that as every vote counts especially in a close race. One thing that politicians understand is the vote. Those who are against us can be put in the unemployment line come November. Make sure that you notify anti gun businesses that you will be spending your bucks elsewhere. If enough people do that they will get the message. By the way Starbucks, a national coffee chain, recently stood up to the anti-gun zealots and we should thank them and give them our business.

If enough people do these things perhaps we can get back our rights in full as the Constitution meant to be.
Posted by Bob Shell at 9:23 AM