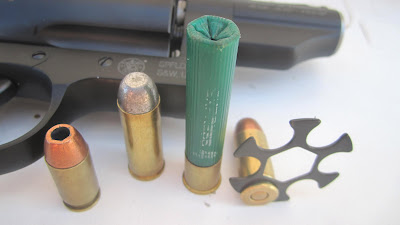 A view of the Governor

Whenever a company comes up with a good idea invariably someone else will bring a similar product to the market. A good example is the Judge brought out by Taurus which is a novel gun that shoots 45 Colts and 410 gauge shotshells. Evidently the Judge is selling well because Smith & Wesson has come up with their own variation. It is a close copy of the Judge with a couple of more features. Don’t get me wrong competition is good in so far as it forces the makers to come up with new and better products which are good for the end user. 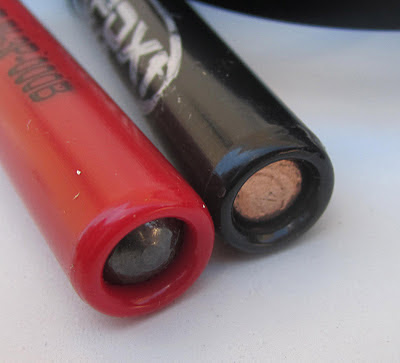 These Winchester loads worked fine in my Governor

Smith & Wesson came up with their model which they call the Governor. It looks like the Judge but S & W has some features that the Judge lacks. First of all they made it a 6 shot as opposed to 5 in the Judge. That does make it a little bulkier however which may or may not be important. The feature that I like the best is its ability to shoot 45 autos. You need moon clips which are provided for that purpose. There are 2- 6 round clips as well as 2 two round versions. They would be great if you wanted to mix your ammo for some reason. I did find that it is difficult to load 45 autos in them but a little dressing with a round file should cure that. The 2 rounders seemed easier to load. The reason that I like the 45 auto feature is the ammo is easier and cheaper to get. The 45 Colt is a fine round but I have heard complaints that many stores don’t have it and when they do it is expensive. The 410 is a 2 & ½’ only which for such a small gun should not be a problem as there is some nice 410 ammo out there for self defense. Since the Governor like the Judge is a close range defense gun 45 autos should do well even if they aren’t the most accurate rounds for that revolver. The sights are fixed with the front sight being Tritium Night Sight and it sports a 2 & 3/4” barrel as opposed to a 3” on my Judge. Fixed sights are not a problem with these guns. Another novel feature is a small key is provided. There is a small hole just above the cylinder release button and you can lock the gun in case there are children around. While neat it is hardly a new idea. I have a very old Dutch revolver that has a similar feature. The frame is scandium alloy which has proven durable over time. Listed weight is 29.6 oz unloaded. The MSRP is $679 and for about $220 more you can get Crimson Trace Laser Grips which are a great addition to any gun. For info on these great sights go to http://www.crimsontracelaser.com/?gclid=CNiR4O-9uawCFQd_5QodgXaIqQ for a complete listing of their products. At this time the Judge has more models to choose from including a verity of rifle variations. I suspect that if it goes over well S & W will add more models and options. The gun is matt black which at this time is the only finish available which isn’t a problem. It you look at the business end of it, it is intimidating. I would not want to be on the wrong end of that or a similar piece in a hostile situation. The double action trigger is decent while the single breaks pretty cleanly. Most women should be able to handle it ok with a little practice. With the verity of the ammo available it should be able to cover most self defense situations. It could be a handy and flexible hiking gun also. Recoil can be a bit frisky with some loads but the grips are comfortable and help deal with that. 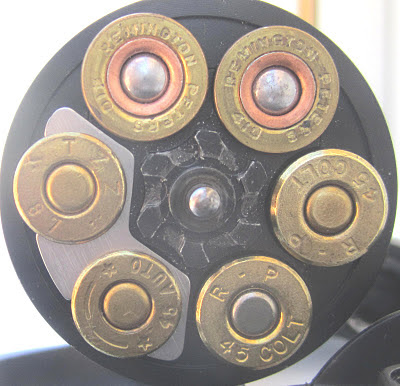 
Shooting the Governor with both types of 45s proved to be a pleasure. The moon clips work fine and the 45 Colts also shot well though a bit high. As a note you can use 45 Gap ammo with the moon clips and 45 Schofield, same as the 45 Colt. You can not fit 454 Casull ammo or 460 S & W ammo in it. There is a step which prevents that with good reason. If you managed to chamber one of those rounds and fired it the gun would be totally destroyed and anyone in the area would be injured. The gun isn’t designed for such high pressure loadings. I would not fire 45 Colt +P loadings either as a precaution and recoil would be excessive. The 410s however proved to be a serious problem. They totally jammed up the gun by locking the cylinder and were very difficult to extract. There is a noticeable swelling by the base which may be caused by the cut in the cylinder that is necessary to load 45 autos. I notified Matt Rice @ Blue Herron Communications who handles S & W’s advertising and am awaiting his reply. He is in contact with a S & W engineer to see if the problem can be resolved. I never received a definitive answer from anyone so I resolved it myself. I read a review in another magazine and they had the same problem. The ammo functions fine in 2 other guns including a Judge so the ammo isn’t at fault. I have come across some information that other Governors have a similar problem with the 410’s. I tried some Winchester factory loads but they also jammed the gun. In the interest of complete testing I obtained some ammo made for a handgun one is 3 balls & the other is the disc ammo with 12 bb’s in it. They worked well in the Judge in a previous test so hopefully they will function in the Governor which they did. 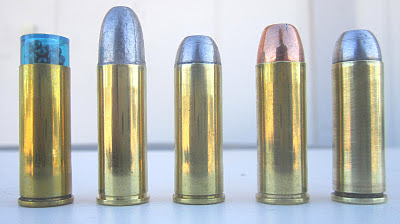 Some of the 45 Colt loads used.


The Winchester handgun loads worked well with no jamming or hard extraction. I used the 3 disc with 12 BB load and the 3 ball load with both working fine. If you buy a Governor and want to use 410’s for self defense stick with the pistol rounds and make sure that they work in your gun. They are pricey but you won’t be shooting too many so that shouldn’t be a major issue. I reloaded the Winchester handgun hulls with my standard load and they worked fine. I would have to conclude that the brass heads on the revolver ammo is heavier then on the regular shells which doesn’t allow them to expand into the chamber. Just to try them out I loaded a few 444 Marlin cases with the standard 410 load but crimped the shot in with a gas check. They were only fair as opposed to test in the past with a 444 Marlin rifle. They showed a noticeable bulge so I don’t recommend them as a substitute for 410’s. I tried them to see how flexible the pistol is and since it isn’t made for those it isn’t a design fault that they didn’t do particularly well. A regular 444 cylinder would improve that but it isn’t practical. Do not even think of shooting a 444 Marlin rifle load in the Governor as it isn’t designed for such a powerful round. Such foolishness will result in disaster for both the gun & shooter. You can use 45 Colts with the Speer shot capsule with good results also. The Governor is a flexible gun and if you handload your options increase dramatically. Accuracy was fair out to 15 yards especially with the oversize 300 grain hollow base bullets. They are sized at 458 and seem more accurate then the 452 diameter bullets. Jacketed bullets offer little if any advantage over the cast types so I didn’t use them except in the 45 auto ammo. A 185 grain HP would be a good defense option in the 45 ACP case. 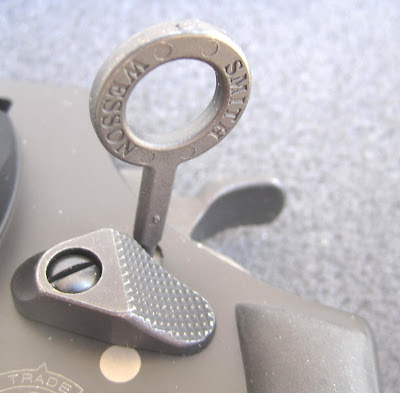 The safety lock is a good feature around kids.


The Governor is a specialized close range self defense pistol. Used that way with good ammo it will perform its duties quite well. It can be handy on a hiking trail against aggressive our legged critters such as coyotes with the proper ammo. With its flexibility you can carry the proper ammo for any situation that you might encounter. With that thought I would recommend it to a buyer looking for such a gun. 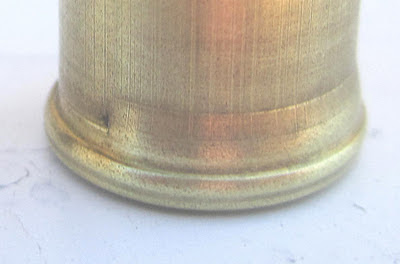 Standard 410 loads produce this swelling in the Governor


For more info on this novel gun you can go to http://www.smith-wesson.com/webapp/wcs/stores/servlet/CustomContentDisplay?langId=-1&storeId=750001&content=11001&catalogId=750051 and see all of their fine products.
Posted by Bob Shell at 12:56 PM

Great site! A friend recommend this to me and I'm glad he did, keep up the good work.