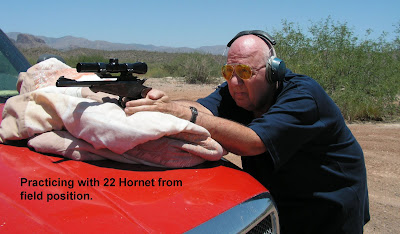 Shooting the 30 Harrett The 30 Harrett There are many wildcats made for the TC handguns as being a single shot it lends itself for many offerings. Length and power are not limited in most cases. It just depends on how much recoil and muzzle blast you are willing to put up with. Some of them are ridiculous in regards to size compared to barrel length. I know of one fellow that has one in the 416 Rigby which to me is total insanity. I am not big on wildcats however one of the better ones in regards to balance and power is the 30 Harrett. It gives a good balance between power and controllability. It has enough power for most hunting situations it should be involved in without punishing recoil. I am not particularly recoil sensitive but like most folks I have limits. The Harrett is accurate and powerful enough for some deer hunting and would be a good varmint round. You can load bullets as light as 60 grains which would work well on varmints and pests. A good 130 to 150 grain bullet should work on deer. Barnes makes a nice 130 which should do the trick. There is a 357 Harrett that is also based on the 30-30 case but is longer and more powerful. The 30 Harrett came out in 1972 designed by Steve Harrett the stock maker and the late gun writer Bob Milek made for the Contender pistol. It can fire a 150 grain bullet at about 2100 feet per second while a 125 can go over 2200 with a long barrel. It can be used for deer but is less powerful then the 30-30 rifle so skill is needed for successful hunting. Shot placement is vitally important to insure the success of your hunt. Some people over look that and concentrate on either excess power or firepower to bring down a game animal. The first shot is always the most important and if you blow that you might not get a second chance. I don’t consider it a long range hunting gun as it doesn’t have a lot of velocity to begin with. Those loads listed are about all you can realistically expect from it with a 10” barrel. I don’t recommend exceeding any listed max loads but that’s true with any gun. The TC is a strong gun but it does have it’s limits. 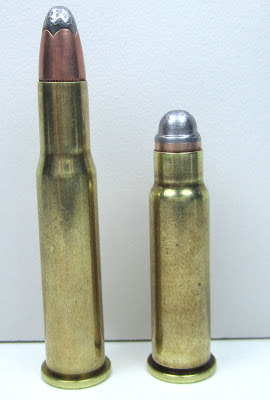 30 Harrett is made from a 30-30 Poor shot placement doesn’t bring down game animals even with powerful rounds. That’s why mild recoiling rounds are sometimes better then something that beats you up. I have seen more then a few hunters that were afraid of their weapon due to recoil but had too much pride to admit it. Shooting and hunting should be about fun not how much punishment you want or are willing to take. Ammo is not available commercially except for small specialized reloading businesses but brass can easily be made from 30-30 brass. Just shorten to 1.6 inches and full length size. With some brass it is advisable to check neck thickness though that’s not generally a problem. Most chambers are tight so full length sizing is necessary. Dies are fairly easy to get, my set is from RCBS and they work fine. By the way it has a case capacity similar to the 7.62 X 39 round though they have different shapes. In a same length barrel ballistics would be very similar. Any 308 diameter bullet can be used from 60 to 150 grains. Cast bullets will also work ok Anything heavier wouldn’t have enough velocity to produce useful results. Cast bullets, which are often overlooked, also will work fine as would reduced loads. Accuracy can be splendid and cast bullets are generally cheaper to buy or you can cast your own. You can reduce the velocity of lead bullets for general plinking. Some of the newer bullets such as the Barnes X type of bullets in the 130 grain range should work very well in the Harrett. Shooting the 30 Harrett isn’t too bad as far as recoil is concerned though with the 150’s you know that you are shooting something. It does have some muzzle blast but no worse then many other high intensity calibers. Ear protection is mandatory unless you want some ringing afterwards. My pistol has a 10 inch barrel which is fairly handy and I wouldn’t want a shorter barrel in this caliber. Actually I wish it was 12” but it is what it is. The 10” barrel does reduce velocity somewhat as opposed to a 15”. My guess with the 150 grain is you would lose around 150 feet per second. While the TC with proper grips will handle many calibers I don’t ever intend to fire something along the lines of the 416 Rigby thank you. Here are a few loads for the Harrett LOAD BULLET VELOCITY COMMENT 21 X 2400 110 grain round nose 2119 consistent 21.5 X 296 123 grain spitzer 2077 very good 28 X IMR 4198 123 grain spitzer 2119 good load 25.5 X RL 7 150 grain round nose 1851 consistent 25 X IMR 4198 150 grain round nose 1847 good load My chamber is very tight so I had to shave a couple of thousands off the shell holder in order for all the ammo to chamber and fire. Once that was done I had no problems with the ammo. With the proper ammo it makes a nice compact hunting package.
Posted by Bob Shell at 2:12 PM