He Can Make Anything


He Can Make Anything


On  our way to the 2012  POMA conference I wanted to stop in Seymour Texas to see a shop that makes all kinds of reloading components and ammo for the obsolete calibers. I have been doing business with Bob Hayley for some years and was anxious to see how  he makes some of the stuff that he makes. I called about a week ahead of time to make the arrangements and everything was set. 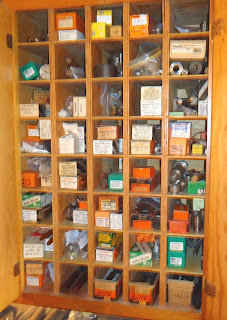 One of his many shelves of goodies


We called when we left the hotel and he wanted to meet us along the road before we got into town. That turned out to be a good move as his place would be difficult to find otherwise. From the outside his place shown no indication of the business inside. There are no signs of any kind showing where he is located. Bob is from the old school, he has no computer if you want to talk to him, picking up the phone is the only way to get to him. Everything is kept simple. He is however an encyclopedia on ammo for old guns. His knowledge of the old guns and their history is vast. He is also a trained geologist and a preacher.  The town itself is a small sleepy town in North East Texas.  Bob is old school and doesn’t have a website so you can call him at 940-888-3352. Chances are he will have what you need.


Going in the shop there are only two rooms neither very large but full of goodies and various types of machinery used to manufacture his products. You see various types of presses and molds. He makes cast bullets that are not available elsewhere from custom molds obtained through the years.  Many of his molds are special order which makes them costly and usually requires a lengthy wait. 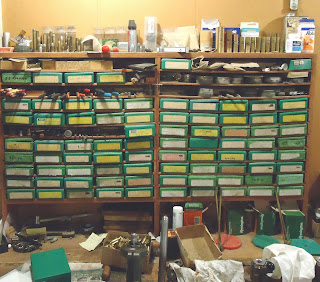 If you want pinfire ammo you are in luck. He can make any caliber in existence that you may want. Since it is a handmade product prices are not cheap but if you want to shoot that old gun he can help you. Since there are pinfires out there his knowledge  and products are appreciated. I have shot his pinfire ammo and it works. 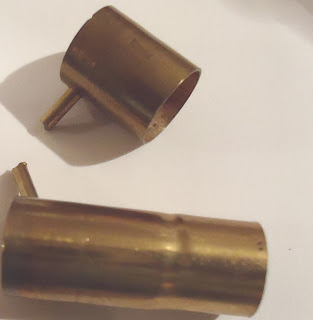 
He has figured out a way to make ammo for the obsolete rimfire calibers. One way he does it is to drill a hole on the side of the rim and use a 22 starter pistol blank as the ignition source. One major advantage to that is the case can be reloaded. Smaller cases need a small primer to obtain the same results.

When making obsolete ammo it is frequently necessary to make the cases out of other cases that can be found. Some of the operations require trimming, swaging and cutting down the rim. As can be imagined special tooling is frequently in order. Bob has all of the necessary equipment to perform these and other operations as necessary. Many of his tools he has modified himself in order to perform the necessary tasks. That is a job in itself because everything has to be so specialized for a specific case. When I was there he had a lathe set up to make 351 cases out of 357 maxies. It is necessary to cut off the rim and put an extractor groove in the case. Needless to say the dimensions have to be precise in order to make a quality product. If the rim is not the correct size feeding problems will ensue. The extractor groove has to be deep enough but if it is too deep the case will separate causing a safety issue. Then it is trimmed and sized to be a finished product. Another example is a machine that swages the case bodies. That has to set it precisely to get the proper body dimensions. At the time of my visit he was making 43 Spanish cases out of 348’s . I form a lot of my stuff but Bob has a lot more equipment so I get some of my brass from him. Also I get most of my odd cast bullets there also as I don’t like to cast much and his bullet prices are reasonable. He makes cast bullets from tiny 22’s to giant slugs. I use a lot of his various 11 mm bullets and they always shoot ok. If you want an 8.15 X 46 bullet with a central driving band then you are in luck. A 6 sided Medford or a 310 cadet slug? Yes and many other bullets that most people haven’t heard of. 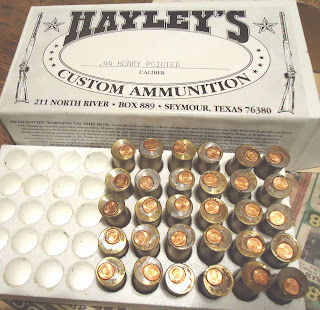 These will make it possible to shoot your rimfire

Some loaded ammo is available upon request as not everyone reloads their own. Also it takes knowledge to load those obsolete rounds. There are times when odd ball ammo is more difficult to load then your modern fodder.  I have purchased Berdan primers from him for some of the cases I load. He is one of the very few sources for these items. He also stocks reloading some reloading tools and dies and you can call to get details. Keep in mind it is a one man operation so be patient as he is extremely busy at this time. 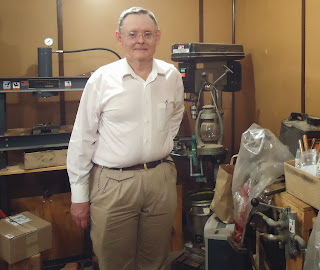 Bob hayley     Looks like a college professor not a maker of odd ammo components
Posted by Bob Shell at 11:33 AM

Great post Bob. Brings to mind the Charola and Anitua pistol that a friend of mine has and is trying to source some 7x18 mm Charola cases for. Wondering if it is something Mr Hayley could do. Here is my post on this unusual an interesting Spanish pistol.
http://isserfiq.blogspot.com/2012/12/old-spanish-guns.html

Share good information about your site, the site is really useful for us. We read your website, share the most useful information in the Site. Thanks for sharing your site here.