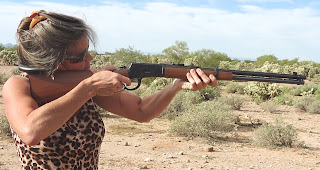 Browning has been around for many years and they make Winchester rifles including the 92. The model 92 was originally offered in the 25-20 and 32-20. The receiver is compact allowing for portability. It replaced the model 73 and among the good features it is more compact and stronger then the older model.  The model 92 was one of the many rifles that John Browning designed in his lifetime.  It is a scaled down model 86. They currently offer this  in 357 mag, 44 mag, and 45 Colt which is the one I have. My sample is in the 45 Colt chambering and with modern loads can be used for deer, pigs, and black bear. Mountain lions have met their match with this rifle. Where legal a handgun with the same ammo can be carried a feature useful in isolated areas. If you have a strong revolver such as a Ruger then good hunting ammo can be carried in either.   The 45 Colt has been around since 1873 and was the most popular revolver round in the old west. There are many different loads available and ammo is available. Reloading components are plentiful so having a 45 Colt rifle is something worth owning. Personally, I would like to see the 25-20 and 32-20 offered but I guess the demand isn’t there. Too bad. Also due to the perfect size of the action, the 38-40 and the 44-40 would be nice additions as there are handguns available for those offerings.  Unfortunately, there isn’t enough demand to offer these chamberings. They have another model chambered for the 454 Casull for those who want more power.
Browning has been around for a long time and offers an extensive line of guns and other shooting related products. For info, you can go to http://www.browning.com/products/catalog/catalog.asp?catalog_=B   and get a list of their products.

Button Bullets are fun to shoot

Shooting this rifle is a pleasure. It is well balanced and the trigger is fine for this gun. Other people who shot it also were favorably impressed. The ejection is very frisky kicking the empties some yards some info for reloaders. When I first received it, the action was pretty smooth indicating some hand finishing. After some shooting, it got even better. Since it has a higher price tag then some others you would expect that.  The bluing and wood are well done another feature expected on such a gun.  One way to test a gun is to let a verity of people shoots it including women and youngsters. Due to its size and weight almost anyone can handle it.  That way several opinions are given and it doesn’t matter what level experience they possess. The important thing is how do they like it and would they buy it if they were looking for such a gun. Comments were favorable in regards to balance and trigger pull. Like the other political correct lever actions it has a safety located in back of the hammer. It is easy to use though not needed.  The only negative comment I heard was the price. It is higher than a couple of it competitors. Some of that extra cost can be attributed to the extra finishing and polishing which may not be visible.  If you don’t mind the tariff then you will be happy with this gun as it does have good quality.  Due to its good handling characteristics it should find favor with the cowboy action shooting matches.

As always, various loads will be tried and since it is primarily a hunting rifle and may be used in cowboy competition, those loads will be used. In addition it is able to take modern loads which will make it useful for game such as deer and black bear.  I have some 80 grain button bullets which I put 3 into a 45 Colt case. At close range they didn’t come apart much but at 35 yards they were hitting about 4 feet from each other. That would be a decent home defense load. The rifle will handle a 300 grain bullet at 1500 FPS which would make it a decent close range hammer.  Accuracy with the open sights is good depending on how good your eyesight is. At 50 yards I can shoot a 3-4” group but my eyes are not as young as they were. A younger shooter with good eyes can expect to shoot a 2” group at that range and perhaps a little better. The sights are easy to pick up and shooting at 50 to 100 yards  if you can shoot.  It would be possible to mount a scope though it would take some work however, it would ruin the balance. In my view a scope would not be a desirable addition. 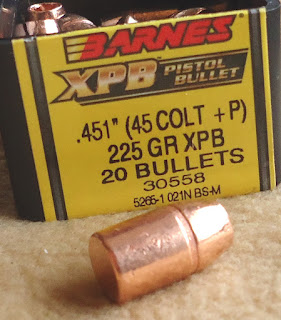 Some loads were chronographed giving us an idea as to its potential. As can be seen some are powerful enough for deer sized game at woods ranges.  I use some Ranier bullets but I have to put a cannelure in them to keep them in place. I tried crimping the case into the bullet but that does not always work. Since they are soft, be careful not to put the cannelure in too deep as that will weaken the bullet. A too deep cannelure can also destroy accuracy.  Properly cannelured  bullets usually give good accuracy. Cast bullets work well and some of the heavier ones are good hunting bullets such as the LBT types. They have gas checks and are cast hard for heavy duty use. Cast bullets can be used in virtually all of your shooting. A quality cast bullet with the proper lube will be as accurate as any jacketed projectile. In addition, they cost less and you can mold them if you are so inclined. Those folks who turn up their nose at cast slugs are missing out on a lot of enjoyable shooting.  The Barnes all copper bullets are light but penetrate well plus reduce recoil some. Since Barnes bullets are all copper they will be more friendly to the environment and in California they are required for hunting. The only downside is they cost more than conventional cup and core bullets.   The Colt round responds well to light loads but I would use a flake powder to take up space as it is a large case. For real light loads Trail Boss is a good choice.  The shorter 45 Schofield case can be used but it might not feed through the magazine tube due to its shorter length. Hornady makes 200 and 225-grain FTX bullets, which will give you some more range. The tip may also aid in expanding on a deer sized animal.  Due to the plastic type tips, they should be safe in the model 92 magazine. With this gun you have a lot of viable options as to what you can do with it. If you don’t mind the mess black powder also does well as that was the original powder used in the 45 Colt round.  With the vast selection of components, the reloader has never had it so good.  For hunting there is a  selection of factory ammo suitable for big game. 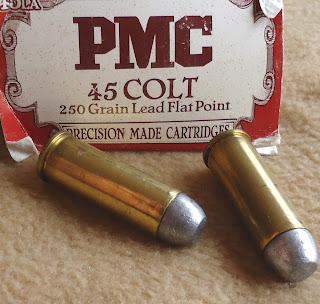 Factory ammo is available thought not inexpensive. For this test I used some Double Tap ammo and as usual it performed well. They have an extensive line of ammo and for info you can go to http://www.doubletapammo.net/index.php?route=product/category&path=125
I used some Barnes ammo and bullets and while expensive it is an excellent choice for hunting. For info you can go to http://www.barnesbullets.com/ 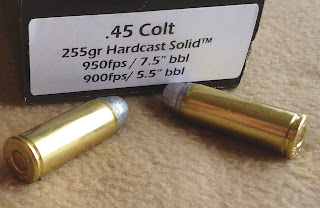 In spite of the popularity of the black guns, a few manufacturers offer guns in various calibers and models that duplicate the old designs but are affordable for the average shooter. Lever guns was an exclusive American design and are very popular among hunters.  Cowboy action shooting is a popular pastime and is getting more popular. Another upside of these guns is they are not as regulated in some states that have draconian gun laws.  Most have good quality and are well worth owning. The Browning is a high quality gun and if the price doesn’t bother you it is a thumbs up as far as I am concerned. Taken care of it will last many years giving generations something to enjoy.

Three for the price of one. Button bullets
Posted by Bob Shell at 12:01 PM 146 comments: