The 351 Winchester Self Loader

The model 07 was a progression from the 05 with was chambered for the 32 and 35 Winchester self loading cartridges. To be honest they were two of the most useless cartridges ever developed. They weren’t accurate enough for serious target or varmint work. Also they didn’t have enough power for deer or any other big game. Economy wasn’t their strong suit either. The 07 chambered a longer version of the 35 which is known as the 351. It came out in 1907 only two years after the 35 WSL came out. Perhaps Winchester realized that the 35 was such a poor cartridge that they hastily came out with the more powerful 351. The 351 is .24” longer then the 35 but there were no other changes. The 35 was dropped in 1920 while the 351 managed to hang on until 1957. While not real accurate or economical it would serve as a deer cartridge in the woods. The rifle is short and handy though heavy making it fairly easy to carry. Like many guns of the period it has that solid feel that could inspire confidence in it. The reason for it’s heavy weight is it is a blowback action which requires more weight and a strong spring to operate correctly. 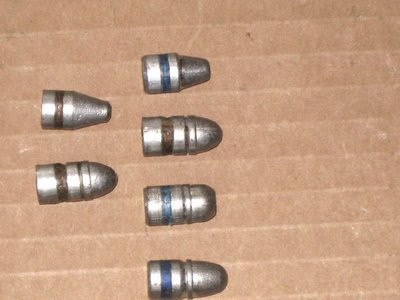 Cast bullets work fine in a 351


Confidence in a firearm can go a long way in its success. Prison guards and some police agencies also used it and it was generally liked due to its light recoil and acceptable accuracy. France and Russia used it to a small extent during WWl and WWll. It was and is generally reliable which didn’t hurt matters any either. Winchester made that rifle until 1957 and ammo was made to some extent until the 1960’s. Because of its handy size it was used to shoot pests such as coyotes out of airplanes. It could be handy in the woods to shoot mountain lions and other critters. No other firearm was ever made for this cartridge as far as I know. While factory ammo is available occasionally it is generally a handloading proposition if you want to shoot it. 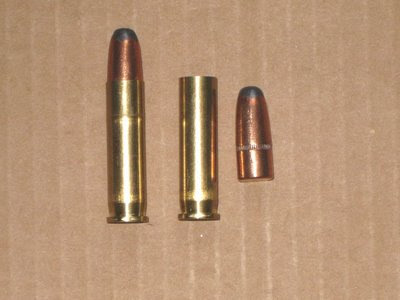 200 grain not available anywhere else


The components are available although somewhat hard to find. Recently Jamison started to make cases for it although they aren’t readily available. Cases can be made from 357 maxi brass which is still available from various sources. The rim has to be cut and an extractor groove has to be installed. For most of us Buffalo Arms www.buffaloarms.com makes the brass at a reasonable price I have shot quite a few of these cases made this way and never had a problem with them. Bullets are an odd size of .351 which is shared by the 35 self loading and nothing else as far as I know. Like the brass they are available from Buffalo Arms and Huntington Die. If you shoot it a lot you can buy a swaging die to reduce the diameter of 357 bullets. C4 sells the die www.4d.com sells it as well as various reloading dies. Another good source for brass and dies is www.huntingtons.com as they sell some odd ball loading components. The standard weight is 180 grains but if you swage your own any weight from 110 up to 200 grains can be employed. Cast bullets can be used for target practice. As long as you have an adequate powder charge to work the action you are in business. Do not use 357 diameter bullets as it could cause difficult chambering and excess pressures. 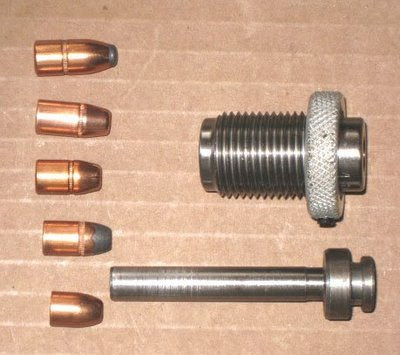 Shooting the 351 is a bit different then a more modern auto loader. To cock it and put a round in the chamber there is a rod under the barrel that has to be pushed all the way back to load and cock it. It takes a bit of effort to accomplish the task. The trigger is quite heavy and I don’t know if it can be fixed. I also noticed that sometimes the trigger is harder to pull then others. Recoil is light though it has a different feel then a modern rifle. The rifle is short and handy but not particularly light. With good ammo, functioning is very reliable. Magazines come in the 5 and 10 shot verity though the 10 shot are scarce according to my info. Since I have no control how loading data is used I bear no responsibility for its use. 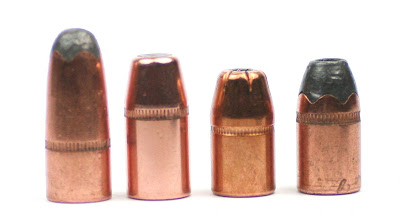 
Like other odd ball guns it is fun to shoot if not entirely practical. To be honest most obsolete arms are not “practical” to shoot but they are fun and that is what most shooting is all about. They can be used for various hunting and shooting projects. Deer and small game will succumb to the 351 given proper ammo and shot placement. I suppose the 200 grain bullet will take a black bear or boar but it could be marginal. They have been taken with less however with good shot placement. If you have one by all means go out and shoot it. You won’t be sorry.
Bob Shell

Great blog as for me. It would be great to read more about that matter. Thanx for sharing that data.
Sexy Lady
Call girls

Thank You. I Have Been Looking for Loading Data. for this for a time now. I Have 4 Box's of Factory .ammo butt hat to bang it up. ( butt really want too ) Where can a person get the dies to sewage the .357 down ,or dies to make the .351 Bullet.I Love to read about the .351wsl,and 35. I Have Some of each. Thank You and God Bless

Thank you for posting information on the 351. Great read.

Hi I found a box of rem 351 win slr 180gr soft point would you be interested in them thanks Lars you can contact me at grizzbear444@yahoo.com thanks

know any one with parts? looking for a fore grip. any ideas?

Great article. I spent my spare time reading some blogs. And I found yours a great and knowledgeable content. Keep it up.

Great article. I spent my spare time reading some blogs. And I found yours a great and knowledgeable content. Keep it up.

There are bullets for the 351 win manufactured by Hawk Bullets. Also best source of information on 351 Win is offered by Leonard Speckin in his book “Winchester Model 07 Self Loading .351 Caliber It’s Past and Future with Modern Brass, Bullets, and Powders.