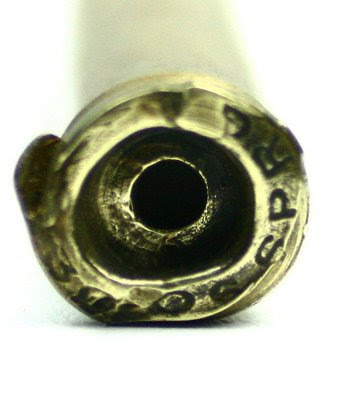 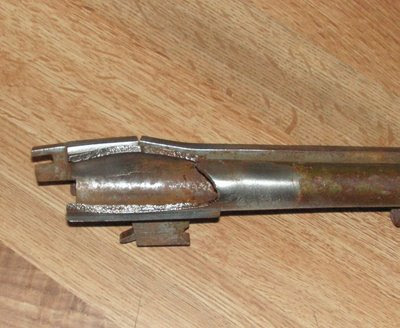 Double barrel blown up by overload


A Discussion on Pressure

Some people think that all pressure in a gun is bad. Nothing can be further from the truth because without pressure the bullet wouldn’t exit the muzzle. When a gun is fired the primer ignites the powder which turns into gas. That process pushes the bullet out the end of the barrel as that is usually the point of least resistance. When the proper amount and type of powder are employed the gun goes bang and you hit your target without any problems. Or at least the gun goes off ok. 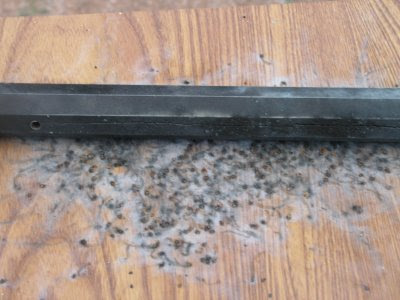 Muzzle loader blown up due to bullet 1" away from powder

What then is the proper amount and type of powder? That would depend on the age and strength of the firearm. A good example of a cartridge to look at is the 45-70. It came out in 1873 as a black powder round in the Trapdoor Springfield and has been loaded in almost any style of rifle ever since. It is more popular today and deservedly so. The Trapdoor while a quality rifle for its time is limited to loads producing pressures of 25,000 lbs. The design and metal technology of the day won’t allow much more then that without coming apart. However there are modern guns that will take twice that pressure without a whimper. The Ruger # 1 and the Siamese Mauser are two that come to mind. With full loads they are junior 458 magnums but if you shoot those loads in the Trapdoor it will certainly destroy it and probably injure the shooter. The Marlin is also a strong rifle capable of heavy loads but the limiting factor may be how much recoil you are willing to accept. If you are in doubt as to the strength of your rifle check with a qualified gunsmith or the manufacturer to ascertain what ammo is safe to use. 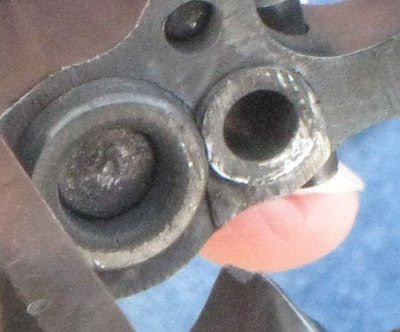 Bullet stuck in revolver can destroy it

Another old wives tale is that the 308 Winchester will equal the 30-06 in power. In your dreams! It started with the original 30-06 load which was a 150 grain bullet at 2700 feet per second. In the 06 that is mild while the 308 can achieve that velocity it does so at a higher pressure. In reality the 308, which is a fine cartridge, can achieve 2700 of so with a 150 grain bullet without excessive pressures. The 30-06 can go over 3000 with careful load development without a problem. I did some experiments with a 308 with a 24” barrel and achieved 2900 plus with the 150 but it was a load that I would not use or recommend as it had definite signs of excess pressure. A good friend of mind achieved the same results with his rifle using a different powder and like mine had excessive pressures. With 180 grain and heavier bullets there is even more of a difference between the 308 and the 30-06. My point is if you have a 308 don’t try and make it a 30-06. And if you have a 30-06 don’t try and make it a 300 magnum. 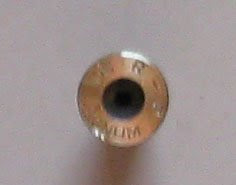 
What then is excess pressure? Some things are obvious such as damaged gun or a blown case. There are less obvious signs but they should be observed and dealt with. While this primarily deals with handloads factory ammo can occasionally be included. If you have sticky extraction that can be an indication of a hot load but not necessarily true. The other possibilities are a rough chamber or bad brass both is unlikely with a new gun and good brass. If I have sticky extraction with a handload that I think is normal I will check & clean the chamber and fire some factory or light loads in it to see if the problem persists. I did have one gun with rough chambers it was a S & W 38 and even with wad cutter loads the empties were difficult to extract. Polishing the chambers cured that problem. If the problem persists I will either reduce the powder load or change the powder altogether. I have a 270 that doesn’t like IMR 4350 for some reason. Even with moderate loads it shows signs of pressure but if I switch to H-4831 it becomes a different rifle all together using a 130 grain bullet in both loads. If you are shooting an old gun with the proper loads and you have hard extraction check for bulges in the case. That is fairly common and you shouldn’t continue to shoot it because a case might rupture. I am assuming that you are using good quality brass. As I am writing this I have a 22 Savage Hi Power that has a chamber so bad that the cases do rupture. The cure for that is to set the barrel back and rechamber which will be done prior to shooting it any more. Other signs to look for are shiny ejector marks on the cases or creatured primers. The primer thing is problematical because some primers have soft cups and may show that with normal loads. Also a sharp firing pin can cause that. If you have fired the cases once or twice and the primer pocket is loose that is probably an indication of hot loads. Soft brass can cause that though with modern cases that’s unlikely. If you blow the primer out of the case that is a very good time to stop and evaluate what you are doing. That is a good sign that you are way over the line and should disassemble the loads rather then shoot them. Shooting overloads in a gun is like speeding all the time in your car. Both will accelerate wear and shorten the useful life of the implement. Most modern guns have some protections in case your ammo ruptures. They have provisions to route the harmful gas away from your face in the event of a case failure. However you should not rely on that entirely but use common sense in reloading and wear safety glasses when shooting.
Another cause of high pressure is shooting a gun with an object such as a bullet or wad lodged in the barrel. Engaging in such activity is the height of stupidly. If there is any possibility of something lodged in your barrel STOP and check it out before shooting again. A wad in a shotgun barrel will destroy it and injure anyone who might be unfortunate enough to be standing alongside it. If you are shooting and the round sounds or feels funny there is a reason and you should check it out. A bullet lodged in a rifle or handgun barrel will at the least leave a bulge and can destroy the weapon. It has happened where a bore sighter has been left in the barrel and a round shot. That will generally destroy the barrel and injure the shooter and spectators. I have seen that happen with bullets lodged so I know it can happen.
A good way to destroy a gun is to shoot the wrong ammo in it. If you shoot an 8 X 57 Mauser round in a 30-06 your day will quickly go downhill from there. First of all you have a partially unsupported case and you are shooting a 32 caliber bullet down a 30 caliber barrel. You always need to make sure you are shooting the proper ammo to avoid such unfortunate accidents. 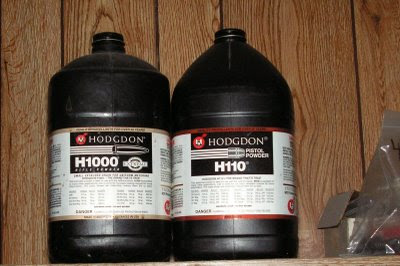 Pay attention to labels to avoid a tragic mistake


What affects pressures? First of all it would be the powder. If you are using a correct powder but put in a grain or two too much it might show pressure signs but probably won’t hurt the gun. The real problem is if you use the wrong powder. For instance if you were supposed to use Hodgens 1000 and picked up Hodgens 110 instead that could be a major disaster in the making. The 1000 is for magnum rifles while the 110 is a magnum pistol powder. The labels look similar and if you aren’t paying attention you could pick up the wrong can. Another thing is if you are using loads that are maximum or a bit above any small change of components will cause a change in how your ammo behaves. If you change primer or bullet brands that can have a negative affect on your ammo. Changing case brands or even a rise in temperature can spike your pressures above where you might want them. If you reduce your loads just a bit these things probably won’t change your ammo as much. Another benefit in cutting back just a bit is your rifle will probably be more accurate and it will certainly last longer. If you do change components be sure to check your rifle for accuracy and point of impact. Make no mistake about it changing components can change your group size and your zero setting. 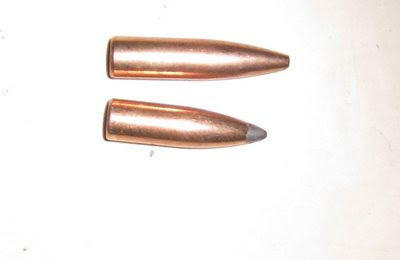 Don’t labor under the impression that case separation is a result of pressure. It is caused by excess headspace. Either the gun itself is at fault or your loading technique. It is easy to have the gun checked and if it is ok then reevaluate your loading procedures. You may be pushing the shoulder back each time you size the case and that in itself will produce excess headspace. To fix that just back off the sizing die and set it to where the case will chamber ok but not any more. If you have excess headspace high pressure will aggravate it but not cause it. Normally a case that separates due to headspace isn’t dangerous but will certainly cause you a problem as the front of the case will stay in the chamber. If you just shot and wounded a bear that could be a serious problem. To get it out you can insert an empty case in the chamber via the bolt and close it somewhat to put pressure on the bad case. Then just extract as normal and both cases should come out ok.
Bob Shell

A sure sign of a dangerous overload
Posted by Bob Shell at 1:20 PM

Hi, Bob...
Great points made about pressure in the blog...right on. I have friends who reload for .45LC, and they are tempted to try and make a magnum out of it. Being a fan of Unique Powder, I always recommend a mild to standard loading with a SWC bullet.

Who knows where to download XRumer 5.0 Palladium?
Help, please. All recommend this program to effectively advertise on the Internet, this is the best program!