Teaching a Senior Citizen How To Shoot 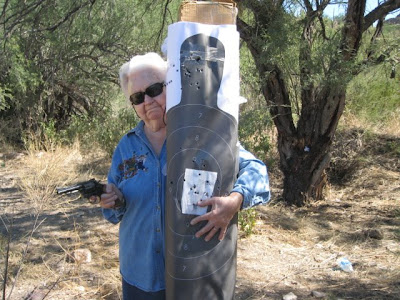 Boy is she proud of this!!! Teaching a Senior Citizen to Shoot

Through out quite a number of years I have taught a lot of people basic handgun shooting. Most of them were in their 20’s or 30’s and have good hand to eye coordination which makes the job of instructing them relatively simple. As a rule they learn rapidly and progress to decent to good shots in a relatively short period of time. Some went on to become really good shots. I worked at a prison and everyone had to qualify in order to maintain employment and I worked with them on this endeavor. 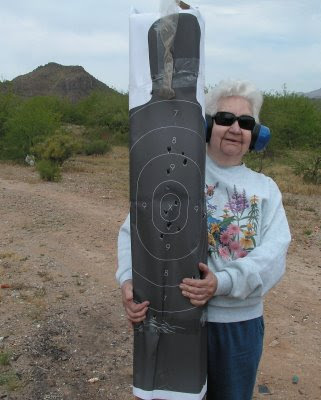 Intruders are in for it

A new and interesting challenge came my way when an 80 year old woman wanted to learn to shoot a handgun for home defense as she lives alone. While she is pretty healthy for her age there were some problems not encountered with younger shooters. I found out that you have to deal with diminished coordination and eyesight among other situations. Like everything I do I regarded it as a challenge rather then a problem. When working with an 80 year old person you have to remember that they move slower, have less strength and coordination plus are sometimes forgetful. Once you understand the limitations you can successfully teach them to shoot well enough to defend them selves in case of a break in by an intruder. Since most intruders are much younger and stronger then a senior the handgun tends to level the playing field. 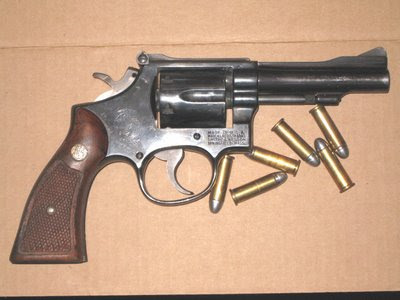 Like any new shooter I always use a double action revolver in a 38 special caliber. While there is nothing wrong with a semi auto pistol it does take more training to safely master it. A 38 has several advantages including ammo supply and is economical to shoot especially with lead bullet handloads. The gun that we are using for these lessons is a S & W model 15 with a 4” barrel. It is a good compromise between weight and controllability for this individual to handle. We tried several other handguns but she felt more comfortable with this one. Feel and weight are very important factors when teaching an 80 year old to shoot. Self confidence has to be built up and maintained through out the lessons. 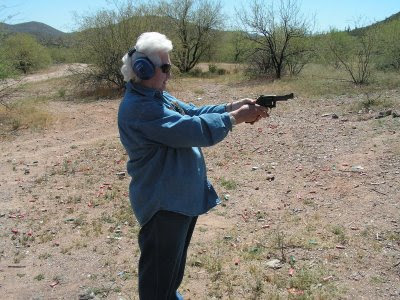 Shooting is about fun!!


Before we did any shooting we went over the various aspects of shooting especially safety. She was instructed in how to load & unload the gun and where to point it at all times. Safety was repeatedly emphasized. We went over stance, sight alignment trigger control and other aspects of shooting successfully. Dry firing was done to give her a chance to get the feel and to allow me to tweak her habits. This was done to an extent as she needed this more then a younger shooter. Because of hand strength limitations we shot two handed most of the time. She also had some issues shooting double action though we are improving on that to an extent. We spent a lot of time dry firing and operating the gun before we shot live ammo. This was necessary and beneficial to her and anyone teaching a senior will do well to remember that they have limitations that the rest of us might not have. Patience is a virtue in this exercise. She dry fires at night which helps with trigger control and hand strength. We also went over some of the other do’s and don’ts such as never allow an intruder to get closer that about 12 feet away and if he attempts to get closer shoot him and other tactical things to do though I tried to keep it as simple as possible. 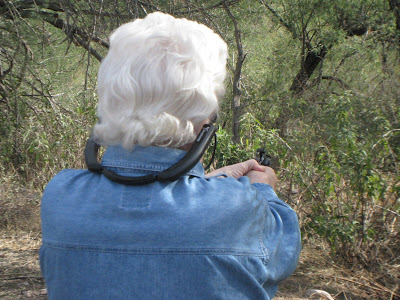 The day came when we went out with live ammo. I used a b-27 target at 7 yards. Right off she had trouble seeing the X ring with all the rest of the black on the target so I pasted a white piece of paper over it to help her focus on the target better. I use a 158 grain semi wadcutter loaded to 800-850 feet per second. This load produces some recoil but not enough to bother her. You might have to adjust that load for someone else. Anyway it is fairly close to a good home defense load. We worked at 7 yards because it isn’t too difficult and is usually the longest distance you will likely have to defend your home at. Again you might have to adjust the distance and target type to suit your trainee.

We started shooting and as expected she didn’t start off real well but she never shot a revolver before so it was a new experience on top of everything. I went over her stance, trigger control, sight alignment and other things like positive thinking. Never underestimate attitude and confidence as without them it will be impossible to be successful in training any new shooter. The prevailing opinion among new handgun shooters is that it very difficult learning to shoot a handgun well so you have to work on that as well as the physical stuff. We got her confidence up and after a couple of range sessions she started to show real improvement. Also a bell went off. She realized that shooting is fun! That happens a lot doesn’t it? She has arrived at the point where she can hit the white all 6 shots and expects to do it all the time. It took a few sessions but we are successful in what we wanted to achieve. If she misses it then she gets mad at herself because she realizes that she is capable of doing that feat of marksmanship. While she will never be an expert in the common way of describing one she is confident of her ability and an intruder breaking in is in for a nasty surprise.
Bob Shell
Posted by Bob Shell at 3:09 PM