Webley and Scott is one of the oldest names in the UK gun industry having been started in 1790. They are responsible for almost two centuries of production of some of the most famous firearms the world has ever seen - the Webely revolver, shotguns, and Webley rifles. Webley was founded in the late 18th century by William Davies who originally made bullet moulds. In 1834 the company was taken over by his son-in-law, Philip Webley, and his brother James who began the production of percussion sporting guns. Two sons, Thomas and Henry, entered the family business during the 1860's. The Webley's manufactured several types of pistols over the subsequent years, including single and double action percussion revolvers as well as pin-fire and center-fire revolvers. It is for the production of handguns, that Webley became famous. Webley's production originally consisted of hand-crafted firearms, although mass-production was later introduced to supply police and military buyers. 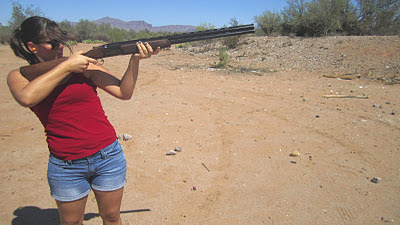 
Recently Webley & Scott started importing some of their fine products into the US. Besides O/U shotguns they offer semi auto shotguns and Airguns. To get an idea as to what they have you can go to www.webleyandscott.com to get a full listing of their products. Derick Cole, who I met at a dove shoot was kind enough to send me a model 900 or properly the 912 indicating that it is a 12 gauge sporting model. Like the other Webleys I saw, it is attractive and well balanced. It has the 5 chokes like all of the other models in O/U. The gun is light and well balanced for bird or trap shooting. The single trigger breaks cleanly and is consistent. The metal fitting is tight as you would expect a new gun to be. The fit and finish rate high and the stock is attractive with a dull finish which I prefer. The wood has a decent figure which enhances the looks of the gun. There is a standard 3 year warranty on the shotguns you just need to send in the warranty card. If you want a fancy model they have the Model 3000 side lock action available for $6500.00 MSRP

The Webley & Scott shotgun is packed in an attractive hard case


Shooting the model 900 was a pleasure. Its good balance and light weight allowed easy tracking of clays. The front sight, which is a red fiber optic, is very easy to pick up which is important in wing or trap shooting shooting. The trigger breaks cleanly and the auto ejectors kick out the empties with authority. I was able to shoot it well with no problems. My only regret was due to time constraints I couldn’t keep it for the late dove season. I have no doubt that I could have limited out due to its good shooting qualities. Time also didn’t allow me to test all of the available chokes but that will come in the future.

The receiver is machined from a single piece of steel by CNC machinery and parts will interchange with other Webleys of the same model. The barrels sport an attractive even high gloss finish. The fitting is very tight as you would expect in a quality gun. Their guns are also usable with steel shot a big plus for duck and goose hunting 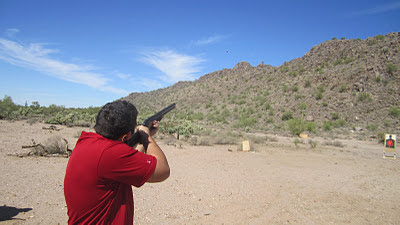 
We shot some trap with it out in the desert. I gave several shooters a chance to try it to get some feedback. One friend couldn’t miss with it. He commented on the superior balance and the front sight. Another shooter also liked the balance and after a few misses he got used to it and started hitting the clays pretty well. He liked the light weight and looks as well. A third shooter commented on the balance and looks. A couple of other shooters made similar comments and no one had anything negative to say about it. My experiences mirror theirs. The only drawback might be the price for someone on a tight budget. If you shoot magnum loads the recoil will be a bit more brisk but for most of your shooting a 1 & 1/8oz load should be sufficient. Most of our shooting was done with 1 & 1/8oz of 7 &1/2 shot which performed well in this gun. I did a limited amount of pattern testing and they were even at 40 yards. Both barrels shot close to the point of aim at the same range.

Glad you enjoyed it

I would really like to try out these shotgun
, where can I see one?

I don't know google Webley & maybe a dealer will pop up

We carry a wide selection of ammunition and firearms ready to be ship at your door-step. Save more money when buying with us and find the appropriate bullet for your gun and shoot more.
Fiocchi 45 Auto Ammunition

Hi There,
Thank you for sharing the knowledgeable blog with us I hope that you will post many more blog with us:-
The Franchi® Affinity® Elite Semi-Auto Shotguns use an Inertia Driven® operating system to cycle 2-3/4″ to 3-1/2″ shells flawlessly and without adjustments. The composite buttstock and forend are dipped in GORE® OPTIFADE® Concealment Waterfowl camo.
Email:support@tacticalammoshop.com
Click here for more information:- more info