In the last number of years there have been a number of companies started up to produce ammo. Some are niche companies while others supply most modern ammo. One such company is Double Tap. It was started in 2002 by Mike Mcnett with the idea of producing high quality ammo for hunting and self defense purposes.  They are located in and have a toll free number 866-867-1066. For info on their products you can go to www.doubletap.com to view their extensive line of products. They started out with three loads for the 10 mm but now offer over 300 loadings in various rifle and handgun calibers. They are adding new products all of the time so it is necessary to check their site frequently lest you miss out on something you might want. I became aware of this company at the writer’s shoot which is a day prior to the SHOT show. I talked to Mike and looked over his ammo and it became obvious that he cares deeply about the quality of his products. Since I have shot a good amount of his ammo, I was curious as to who developed the loads they use. It turns out that Mike does all of the load development for Double Tap. That job requires a lot of knowledge about ballistics and loading not to mention the time involved . Since his ammo shoots so well I can appreciate the dedication he puts into developing his products.  They also sell some accessories including some brass and bullets so that might be something to look into. 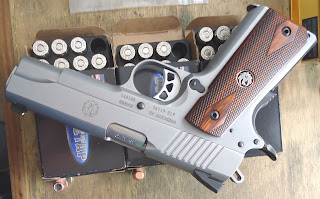 A couple of weeks after the SHOT show was over he sent me some sample ammo in 380, 9mm and 40 caliber. He uses premium bullets from such makers as Barnes Hornady and Nosler all top notch. He buys brass from various makers and it is always top grade. A couple of loads have a high ES but that could be a function of that individual gun. Every gun is different and some don’t like a certain load or bullet. That is why it is important to experiment with your firearm to see what it likes.

We shot the 60 grain Barnes in the 327 at 25 yards and they were very accurate. A better rest & less wind would have done better.  I have also shot some of his ammo in a couple of Diamondback pistols that I was testing out. They are very sub compact models and they performed well with his ammo. Calibers were the 380 and 9 mm. Accuracy for such small pistols was outstanding.  Neither gun jammed with this ammo. 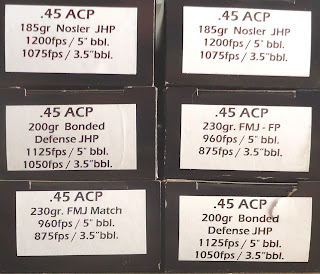 The Rock River 308 shot the Double Tap very well at 100 yards giving groups in the 1” area consistently. Both the Barnes and Nosler Accubonds shot well indicating good quality ammo.  Either bullet would be suitable for large game hunting since there were no feeding issues..

The 45 Auto Rim came out during WWl to supplement the 45 ACP. It is used in Colt and S & W large frame revolvers. I have a S & W 1917 which I used to test the Double Tap load. As usual it performed well. That is a potent load but they have several others in the auto rim caliber. 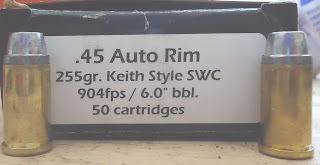 
I recently received a Ruger 45 auto with a 4 &1/4” barrel for T & E. I thought that Doubletap ammo would work well and I was right. The Commander digested everything that I fed it.  For personal protection the Nosler 185 grain load would be hard to beat and I plan on using it as my carry load.

I have a LAR Grizzly in 45 Win mag.  There were several guns made for this caliber though the Grizzly and the Wildey were discontinued. TC makes a barrel and Freedom Arms offers an optional cylinder for their model 83. Factory ammo is difficult to find unless you check with Double Tap. They make four loads for it so you are in luck if you are lucky enough to own one of these pistols.  I started shooting ammo in this gun but unfortunately, the ejector broke so test was cancelled. The Double Tap look good with the limited shooting I did. 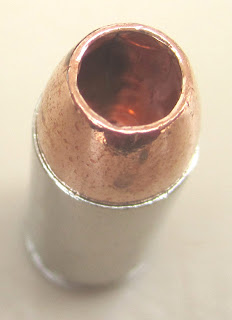 Up to a few years ago when S & W introduced the 500 the 454 Casull was the most powerful commercial handgun. With good loads it is capable of taking any big game. Double Tap makes some loads for it and they shot very well in my Freedom Arms model 83 with a 10” barrel. Recoil with the 400 grain can be only described as brutal.

Recently I had a chance to visit and tour his factory in . While the operation doesn’t look large the available space is utilized in an efficient way. They use a number of Dillon presses to manufacture most of the ammo. The Dillon presses are set up for production while maintaining the high quality control that Mike demands. For the most part he uses Starline brass which is also a quality product though other brands are utilized.. Bullets come from various manufactures such as Barnes, Nosler and Hornady. The rifle ammo is hand crimped in a single stage RCBS press and individually inspected by the operator. He has opened a new facility near the old one because of the rapid growth he is experiencing.


I have shot a lot of his ammo and have never had any type of problem. There are several ways to measure ammo quality. First of all it has to be safe and fit and feed in the gun it is designed for. Next it has to be consistent in order to be accurate. Consistency is usually measured by a chronograph, which measures its velocities among other factors. If it has a low standard deviation and ES, the difference between the slowest and fastest shot in the string, then that is an indication of good quality. Among other things it requires the proper powder and amount is used which takes some experimenting and time to develop such loads. It also has to be safe in the guns that it is designed for. Consistent ammo also is accurate an important consideration both in hunting and self defense. Mike puts the velocity on all of his boxes and the guns that were used to develop the loads. If your gun is similar to his then you should get similar results. I have shot a good amount of his fodder and the velocities are always very close to the advertised speed.  I’m here to tell you that his ammo meets all of the criteria necessary to call it great ammo.  Based on my experiences with it I would recommend his ammo without hesitation. I don’t see how his business would ever fail with the quality products and service he offers. 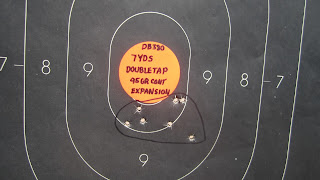 Ammo is accurate also
Posted by Bob Shell at 1:42 PM

Authenticity is what it's about using the cowboy action crowd and also the enthusiasts along with other photographers of those guns.What is more "authenic" that getting a repro in it`s original