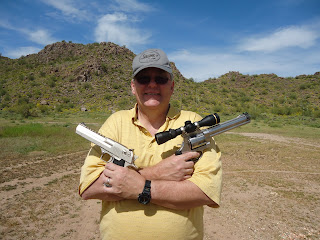 
There are various ways of making bullets including casting, swaging and machining them. CMA uses the swaging method which entails forming them under pressure using dies. The dies determine the shape and caliber of the bullet. Both jacketed and lead bullets can be formed this way. One advantage to swaging is you can have a die made to make any type of bullet that you can dream up. There are some dies made by a couple of companies that are capable of making your bullets. It is fairly expensive to get into swaging and can be downright costly in some instances. So if you want to swage be prepared to lay out some cash.  A better option might be buying custom bullets from a custom maker such as CMA. His prices are very reasonable which is another plus.


Another option is to buy them. Most bullet companies swage their bullets under various criteria depending on what the projectile is going to be used for. If you like specialized bullets then a small company may be the place to check out. One such company that makes unique bullets and offers some loaded ammo is CMA.    For info you can go to  http://www.cmacustomammo.com/   for more info and availability. Let’s be honest!  Anyone who reloads likes to experiment with various loads and bullets and this is a great way to achieve that goal. You might be able to suggest an idea to John and he might be able to make it but check with him first. All custom bullets require tools and dies specific to that particular slug. Since I do some swaging, I am well aware of the needs of custom bullet making. 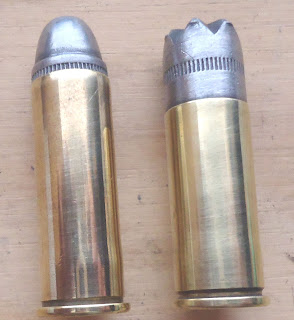 As with all aspects of shooting the proof is in the pudding. How well do they shoot. I have used some of the hollow base bullets in 45 and they produce good accuracy even in a Judge, which can be finicky. Their stack-ems separate very well as they are supposed to. Light and button bullets can be useful in some self defense loads where excess penetration could be an issue. I have just received some 44 and 45 hollow base bullets which I have shot with good results. John also sent some 9 mm in 69 and 135 grain hollow points which performed well. The 69 should make a nice bullet in the 380. With such a light weight they should help make the 380 a serious social load. 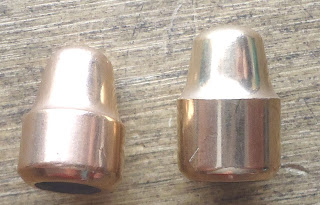 
We have shot some of John’s bullets and accuracy is always good. Even the Governor, which isn’t known for accuracy, shot them well especially the hollow base types. Many of his bullets are made for self defense and with his designs I see some good potential there. He makes some stackers, which are different, and with two or three bullets hitting an intruder at the same time, keeping your family safe should be no issue. He sent some 45 ACP 200 and 220 SWC bullets which should be good for target or small game hunting. They are FMJ’s and have a prominent bevel, which is lacking on most of these type of bullets. The advantage of a bevel is you don’t have to flare the case as needed in most handgun loads. That will extend the life of a case because beveling works the case mouth which will cause splits. With normal loads case splitting is the main cause of failure. 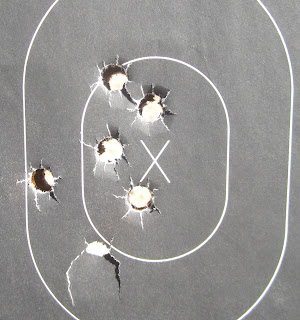 
I finally got to meet John and he brought some samples to shoot. One interesting one is a 45 ACP 125 grain Tiger Claw HP. I am looking at a lightweight bullet that will cut down on recoil and still be effective.  After shooting this bullet in 2- 45 autos, I see a lot of potential for it. Accuracy is outstanding and at 1200 fps recoil is pleasant. The cavity is large which should expand readily in most medium. He uses  full length jacket with a plastic ball behind the lead core. While that changes the balance point of the bullet accuracy isn’t compromised, in fact it might help out in that department.  The full length jacket aids in feeding. One complaint that I have run across is the recoil of some 45 ammo. Even some of the hot 185 grain ammo drew some negative comments from mostly female shooters. I use a load of 7.5 X 231 and get real good results. A 125 grain HP at 1200 FPS  makes a nice controllable round in the 45 and would be effective for self defense. I let a couple of female shooters try it and they have a very positive review of it. They would carry it in their 45 ACP pistols.  Yes, women carry and shoot 45 autos.


Like many people, John wants to start and run his own business. One requirement to being successful is to have a quality and useful product. John’s items fill both those needs nicely. Reasonable prices are also necessary as well as good customer service. I have been dealing with him for some time and he is always a pleasure to deal with and anyone looking for some good bullets will do well to contact him.  There is a market for his innovative products and I for one hopes he succeeds. 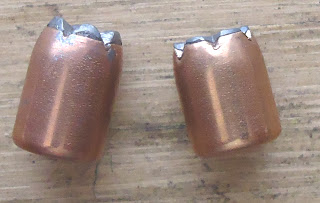 38 & 9mm bullets good for self defense also accurate
Like many of us John started out with a single shot 22 with the help of his grandfather. He progressed along and at the age of 12 received a 22 auto loading rifle. Like many other people in the industry John progressed through the necessary steps in learning about handloading and bullet making. I would suggest that you contact him for prices and availability especially if you want a custom bullet. With the demand for ammo and reloading components there is always room for a good custom bullet maker.


He is a life member of the NRA Since 1979 and a Life Member of The Colorado State Shooting Association (CSSA) as well as a member of the 50 Cal Shooters Association, Army Marksmanship Association and the Elk Foundation. I try and keep myself current of activities that affect the shooting and hunting industries that we all hold so Dear.

Some more target bullets from a good selection of CMA products.

It is easy to Gun For Sale Florida. Welcome to floridaguntrade.com a place where Florida residents can buy and sell their guns for free