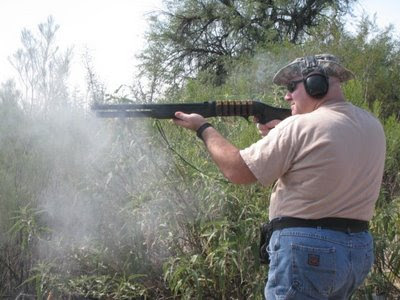 The Blackhorn 209 functions this 3" Benelli

Recently I was given a sample of a new muzzle loading propellant to test out. According to the label it is meant for modern muzzle loaders using a 209 shotgun primer hence its name. One thing I found out right off is its low density as the kernels are hollow. It comes in a conventional 1 lb can but contains only 10oz of powder. You could say it is the black powder equivalent of Trail Boss. The powder is black and looks like an extruded powder such as 4895. However the kernels are hollow which makes it less dense. Another plus with this powder is it meters very consistently in a powder measure. They also carry the AA line of powders which I count among my favorites. They can be contacted at www.blackhorn209.com or call 406-234-0422 
I have developed a load that is suitable for shotguns. It is 70 grains of 209 and 1 & 1/8 oz of shot. I use a thin wad as the powder takes up a lot of space. A Winchester AA or similar shell works the best. The load functions a 3" benelli with no problems where upon it won't function with a low brass load. Penetration of the 209 load seems to be adequete for bird hunting.


Another observation is this powder smokes but not a much as some of the others. It burns clean not leaving much residue in the gun or case. I have found very little residue in the cases and the outside is very clean with the exception of a couple of the smaller rounds. The cases have soot from low pressure loads in such calibers as the 9.4 Dutch. With black powder or Cleanshot there is a lot of residue in the cases which must be cleaned out prior to reloading. Sizing the case usually helps with that. If you don’t tumble it first the black powder and Cleanshot adhere to the case walls and sizing will knock it off. The barrel is clean as it is advertised as being non corrosive. Also it isn’t particularly pleasant to inhale. I tried 25 grains in a 44-40 case as a blank but the powder didn’t make much noise and due to weak loads jammed the gun. Other then large rifle cases it probably isn’t suitable for blanks. I haven’t experimented much in that area. Shotguns are another area that I am currently working on and there seems to be some potential there though I haven’t finished the work there yet.


Shooting the 45-120 with a 535 grain at 1700 was an experience that I don’t care to repeat very often. It definitely rattled the teeth. The Gras was also somewhat frisky but like the 120 loads were very consistent. The 43 Spanish also did well with this powder. All in all I find that this powder produces higher velocities then black powder or any other substitute I have tried especially in the larger rifle rounds. I hope to use the French Gras on a buffalo with 209 as the propellant. I have no doubt that it will deliver the goods. It is a very worthwhile addition to anyone who shoots black powder type arms. My shelf will always have it around.
Bob Shell