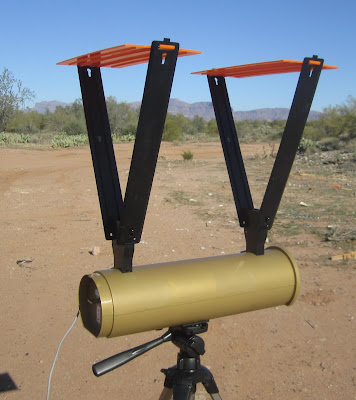 
RCBS Chronograph
As a result of going to the 2011 SHOT show I received a RCBS Chronograph for testing and evaluation. Sheila Ennes sent it along with the Speer # 14 reloading book which I find extremely useful. The chronograph is made in China, what isn’t these days, has a novel shape much like a large round of ammo. It mounts on a standard camera tri pod which is a plus for it. The screens and electric eyes are stored inside the body which really makes it handy to carry and store. When it is in use it comes apart with the smaller end has the screen and various buttons while the larger part holds the sky screens. It is easy to assemble for use. All in all a neat arrangement especially for transport.

It has the usual buttons to retrieve data but I have found it less then user friendly. It seems overly complicated to operate at least to a gadget klutz like me. My shooting buddy who is better with gadgets doesn’t have as much trouble though he agrees that it could be easier to operate. Over a period of time it is getting easier to operate once you get used to the buttons. It helps to read the directions. It doesn’t have print capability at least yet. It takes a nine volt battery and has a one year warranty. 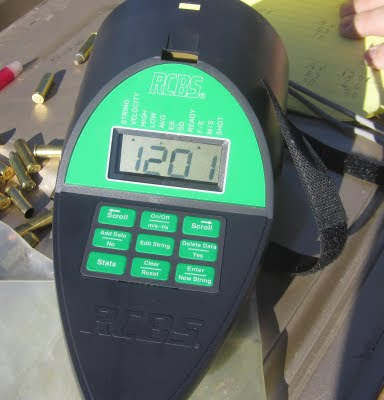 Large numbers are easy to read


I have used it for quite a few types of guns and it picks up the velocities well from about 600 FPS to 4000. The numbers are large which makes them easy to read something my aging eyes appreciate. It is capable of reading velocities from 500 to 7,000 FPS and can also be read in meters per second. It weighs 4 LBS and 2 OZ and has 20’ wires which are nice because sometimes you have to be further then 10’ from the start screen. I find that true when chronographing black powder loads.

If you are looking for a moderately priced chronograph then I would suggest you check out this model. It novel storage features and lower price, around $130, gives it a thumbs up.
Posted by Bob Shell at 4:44 PM