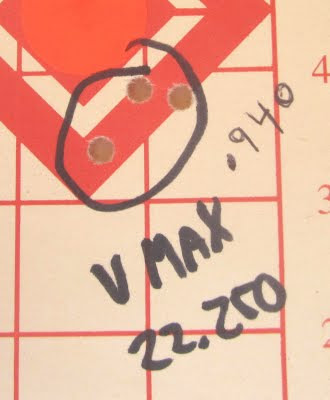 
At the 2011 SHOT show I went to the Hodgdon booth as there are always new powders to try. They had their recently introduced new powders including the LEVERevolution and Superperformance brands. They were recently introduced to us handloaders with the idea of improving the performance of certain cartridges. It is the same powder that Hornady uses in some of their factory loads. Both are ball powders that meter very evenly in most powder measures. The burning rates for the LEVERevolution is between BLC on the fast side and H-380 on the slow side while the Superperformance is between H-4831 on the fast side and WW 780 on the slow side. Between the new powders being introduced and the Hornady FTX bullets there are a lot of exciting possibilities for some of the old standbys. With the Hornady FTX bullets a tubular magazine can be safely loaded with pointed bullets, extending its range. Those bullets are available in 30, 32, 338, 35, 357, 44 and 45 calibers so anyone with a lever gun can take advantage of these fine bullets. Stay tuned they will probably be offered in more choices because of their efficiency and popularity. Not only do they extend the range of a lever gun but with the plastic tip they are more likely to open up at the longer ranges thus giving the hunter better killing power. They can be used in some bolt guns as well as revolvers so there is something for everyone. Do not load conventional pointed bullets in a tubular magazine as the point can possibly set off the round in front of it due to recoil. If that happens the results will be disastrous for both the gun and shooter. If you want more info on Hornady’s fine products you can go to http://www.hornady.com/bullets They also carry FTX bullets in handgun calibers. 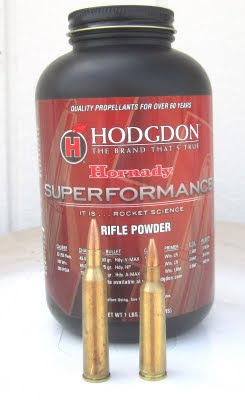 Superperformance can be used in a verity of cartridges

I have a Ruger model 77 in 220 Swift with a 26” barrel and thought it would be interesting to try it with the new powder. I would not exceed these loads as pressures can rise dramatically with a small increase in powder charges.
LOAD Bullet Velocity COMMENT
47.2 X Super 50 grain Remington HP 4272 consistent max
47 X Super 52 grain Hornady 4253 ok max
45 X Super 55 grain Sierra BT SP 3973


44.5 X Super 60 grain Sierra HP FB 3730 high es
44.5 X Super 63 grain Sierra HP FB 3708 high es
Notice that the velocity dropped using 46 as opposed to 45 but it was more consistent. It seemed to like the 55 grain bullet in this rifle. The Swift needs a little more work which will be done as soon as I can get more powder. Like all powders it doesn’t do everything for every gun but when you get a fit it really works out well. They have a fairly narrow field of cartridges that they are suitable for but if you find one that they are meant for they really will shine. The new Hodgdon reloading manual lists quite a few calibers that these powders are good in. The Swift being an example it likes some bullets better then others. The same can be said for the 22-250 or any other rifle for that matter. Hodgdon states that they can’t keep up with the orders so it may be a while before I can get some more. It should work well in such cartridges as the 300 RCM and Win Short Mag. As a note both powders meter extremely well. I have measured just about every powder available and these two powders meter as good as anything I have used and better then virtually all of them. I checked them for consistency and virtually all the time there was no difference in the thrown weight. Occasionally it would vary by 1/10 grain but that was rare. For those who weigh each powder charge, it shouldn’t be necessary with these two new powders. For more info on these fine powders you can go to http://www.hodgdon.com/ They also carry Winchester and IMR powders and you can get free loading info on their site also. The Sierra bullets used produced exceptional accuracy which I have come to expect from them. For more info on their line of bullets you can go to http://www.sierrabullets.com/ I have been using a Vortex 4.5 X 10 scope on the 22-250 and it has great optics enabling us to shoot good groups. For more info you can go to http://www.vortexoptics.com/ for more info on these great products.