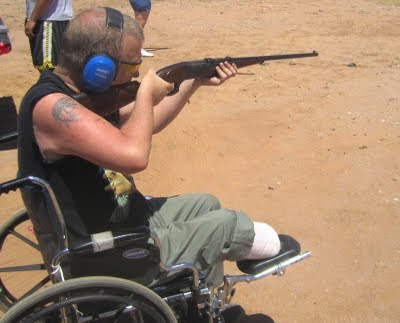 I also received some LEVERevolution powder from Hodgdon. A Marlin 336 20” barrel in 30-30 was used for this test. The 30-30 has been around for some 115 years but continues to be very popular for deer hunting. With the new powder and bullets its popularity will soar because the guns are so handy and relatively inexpensive. You will gain at least 100 yards with the new powder and bullets.
LOAD BULLET VELOCITY COMMENT
37 X Lever 150 grain Barnes TSX 2385 nice
36.5 X lever 160 grain Hornady FTX 2335 consistent
35 X Lever 180 grain RN 2144 good load

The 25-35 is another old timer however they are still fairly popular. With that thought I tried a load. The factory load lists a 117 grain at 2230 so you can realize a 150 FPS increase which may make it suitable for close range deer.
26 X lever 117 grain Horn RN 2386 nice load 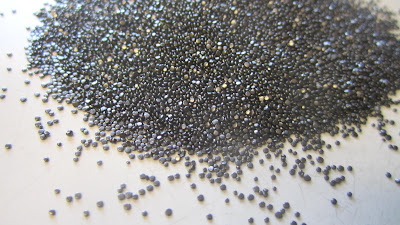 LEVERevolution is a real fine powder that measures consistently


So what good does the FTX bullet do over a conventional round nose bullet in regards to usable range? Let’s use 1000 FT LBS of energy as the minimal amount to reliably anchor a large game animal according to many experts. You can probably boost the velocities of the round nose bullets using lever powder a hundred feet per second or so but what would be the point. You still have a poorly shaped bullet and at most you would gain a few yards of useful range. In my opinion it’s not worth the time or effort. The ballistic coefficient of a Hornady 170 grain flat nose is .189 while the FTX is 330, quite a difference.
150 grain rn
Muzzle 2390/1902 100 yards 1959/1278 200 yards 1581/832 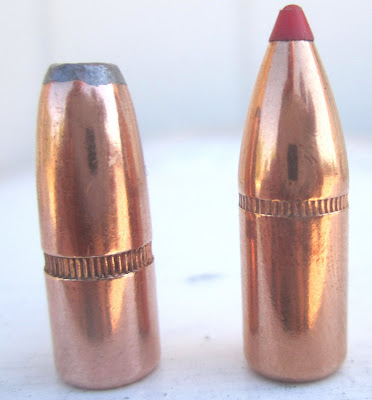 
Even though the 303 Savage is considered obsolete there is still a demand for the ammo. Quite a few people still hunt with the Savage model 99 because it is so durable and still gets the job done. With that thought I decided to work up a couple of loads which will enhance the performance of the old round. It has about 3.5 grains more capacity then the 30-30 using Lever powder. I added a conventional bullet for comparison.
38.5 X Lever 160 grain Hornady FTX 2447 consistent
36 X Lever 180 grain RN 2220 nice

The 30 Remington has a very similar case capacity to the 303 Savage so I tried one load. I used a Remington model 14 pump for this test. Like the 303 Savage the 30 Remington is still moderately popular among deer hunters. The rifle is both light and handy in the woods both desirable traits. Both the 303 Savage and 30 Remington were brought out to compete with the 30-30. For awhile they did pretty well but were dropped after WW ll.
38 X Lever 160 grain Hornady FTX 2504 consistent-max 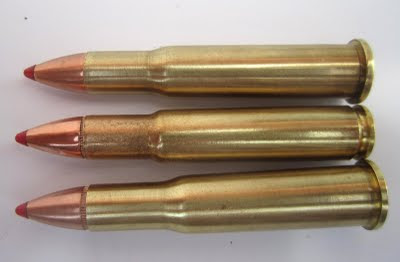 
The 35 Remington also has available a 200 grain Hornady FTX which will extend it range also. I used a Marlin model 336 with a 20” barrel for this test. The 35 Remington is still being offered in rifles and factory ammo is available to some extent but like the others in its class handloading brings out the best in it. Quite a few years ago when I was a youngster I can remember my dad having a Remington pump in 35 and he didn’t have a great deal of trouble harvesting a deer at woods range. It would be interesting to hear his comments on the new FTX bullets.
41.5 X lever 200 grain Hornady FTX 2064 good load
42.5 X lever 200 grain Hornady FTX 2164 great load
The 200 grain FTX starting at 2225/2198 still has 1503/1003 at 300 yards which makes it a legitimate 300 yard round if you can pull off the shot.
The 200 grain round nose commonly used in the 35 launched at 2100 FPS would have dropped to 1,000 FT LBS of energy at 150 yards. That would be about ½ the range that the FTX can be used at. You can use a round nose with this powder and get a hundred feet per second or slightly more but due to the poor shape of the bullet you would realize very little range advantage.


I fired the 325 grain FTX in the 45-70 velocity was 1957 and accuracy is good. With a BC of .325 it flattens out the trajectory from a 300 or 350 grain roundnose. You can load the 325 grain up to 2200 FPS in a modern gun such as the Marlin but not in a black powder rifle such as a Trapdoor Springfield. If you reload the 325 grain FTX in the 45-70 you may have to trim the case a bit shorter then normal. Because of the shape of the bullet the cannelure has to be located where it is for best results. Hornady designed it that way to give it the highest ballistic coefficient possible. Hornady offers FTX loads in factory ammo in case you don’t reload. The factory Hornady ammo does have a slightly shorter case so you might want to keep them separated from the normal cases. I have tested a lot of Hornady ammo in various calibers over the last couple of years and it always chronographs at or near the advertised velocity and is always accurate and reliable.

So yes there is a major advantage to using FTX bullets with new powders if you want to extend the range of some of the old standbys. How important is that to you? If you stay in the woods and never hunt fields it might not make much of a difference. However if you come out to the edge of the woods and see a nice buck across the bean field 200 yards or so away then you might want to ask yourself? Do I want the standby flat point or the new FTX loaded with LEVERevolution powder? Your answer will determine if you will harvest that buck or watch him walk away. With the new ammo you will gain a flatter trajectory plus a possibility of better accuracy as well. My calculations indicate a 100 to a 150 yard range increase for such calibers as the 30-30 & 35 Remington which is nothing to sneeze at. If you have a 32 Winchester or 32 Remington you are in luck as they offer a 160 grain FTX bullet. You can have usable ranges to 300 yards provided you have the skill to pull off such a shot. Most game animals are shot within 200 yards; though a longer shot is sometimes necessary so instead of buying a new rifle you can upgrade the old smokepole, another advantage to using new bullets and powders. You just need to know that these products are not magic wands. If you don’t have the skill with conventional ammo you probably won’t gain anything with the new stuff. With the new ammo, if you have a longer shot then you are covered. The long and short of it is if you have a rifle such as a 30-30 and don’t want or can’t afford a new rifle a change in bullets and powder will give you an honest 100 to 150 yards in useful range. That alone can save you some bucks and make your hunts more successful. 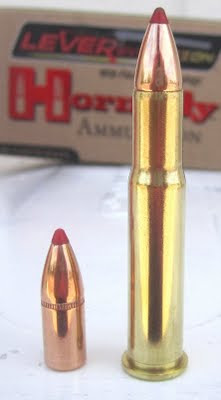 
There are a lot of changes taking place in the shooting industry including some new calibers and gun models. However the most interesting changes may be taking place with the introductions of new powders and bullets. Today’s ammo is more accurate and gives better killing power then that that was made a generation ago. For us hunters those changes are a good thing. Just remember this isn’t your grandfather’s bullets or powder even if it’s his gun.
Posted by Bob Shell at 4:40 PM

Thanks for the great article on LVR powder in the old-timers.

Going up to the loading room now to make some 32 Special!