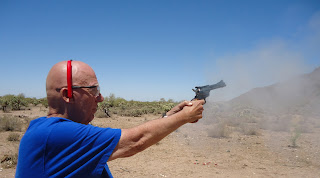 
The day before the SHOT show starts there is a media shoot which gives us an opportunity to handle and shoot new guns. I stop at Colt to see what they had on hand. Immediately I saw an attractive single action in 45 Colt, which is one of my favorites. Upon examining it and some shooting, I know that I had to have one to evaluate and write about. It is that nice. So I put my request in to receive one.  I have tested other Colt products including a Delta Elite in 10 mm and they always performed well, if a bit pricey.

One thing that I want to mention is the sensgard hearing protection.  I have been using them for some years and they are my favorites. They are light and convenient plus cost is very reasonable. I would highly reccomend them. For info you can go to http://www.sensgard.com/


Sometime later, it finally arrived. Upon opening, I was reminded on why I liked it so much. It is an attractive gun with a case hardened receiver while the rest of the metal parts are blue. The wood grips have the Colt medallion in gold color. The fit and finish are of high quality, which you would expect of a gun in this price range. It is a typical Colt single action with a couple of upgrades. The sights are adjustable and it has the safety to avoid one going off in case it is dropped. It holds 6 rounds of 45 Colt ammo with a 4 &  5/8 inch barrel on my sample.  Colt made the New Frontier from 1890 to 1981 so this is a reintroduction of that model. It is also known as the flat top model and is also available in 44 special and 44-40 though that might change.  According to my gauge the trigger broke at 3 Lbs. and was consistent. There was virtually no creep or mush in the trigger which is a major aid in accurate shooting. It is one of the better triggers I have encountered in a single action revolver.   There are four positions that the hammer can be placed in. The first notch locks the cylinder and may be some sort of safety second notch rotates the cylinder. Colt came out with the revolver as we know it in 1836 with the cap and ball model. It was improved until 1873 when the 45 came out in their single action which is still being produced today and is essentially the same. It is one of the most recognizable handguns ever produced.  My gun shows a patent date of 1873 in spite of it being new. 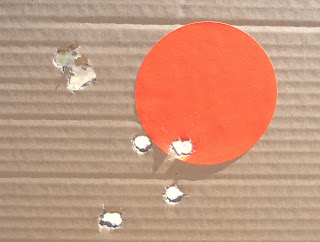 
Shooting the Colt with these loads proved to be a pleasant experience as recoil was mild and accuracy is good. I shot other loads during the test and everything was accurate that showed good accuracy but they hit to different points on impact. That is in no way a fault as I tried a verity of loads including black powder. The Ten X loads shot well and if you are looking for some good cowboy loads I suggest you give them a try. For info on their line of ammo you can go to http://www.tenxammo.com/ for info. Bullets used were .452 in diameter except the Hornady which is .454. That was the original diameter of the old Colts. I used Goex black powder, which gave good accuracy and consistency, but the velocities were lower than I expected.  With these light loads you can shoot all day comfortably.  Also I shot quite a few Ranier bullets as they are not lead or as expensive as conventional jacketed slugs. As always they shot very well and were accurate. I would suggest that you give them a try and you won’t be sorry. For more info on their fine products you can go to http://www.rainierballistics.com/. 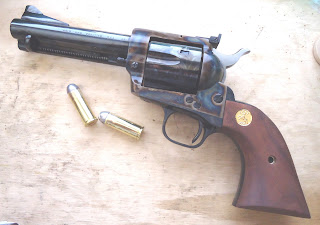 45 Colt with ammo. A handsome gun


The grip is a bit small for my hand but there are plenty of aftermarket accessories to resolve that problem. With the mild loads I contemplate, shooting larger grips are not needed. If I want more powerful loads I have a Ruger and Freedom Arms to use.  At 15 yards offhand careful shooting will produce groups in the neighborhood of an inch. The action and trigger are very smooth indicating that some time was spent on the action. Everyone who shot it was favorably impressed. Since the action is essentially the same one that came out in 1873 there will no  hot loads used in this test. I have shot a 45 Colt that was made in the 1880’s and it felt very similar to this new one. The only difference was it had a longer barrel and fixed sights.  The Colt has a tendency to point naturally another plus. I would not feel that I was at a disadvantage in a home defense situation. With its point ability and large bullets it should settle an affair rather easily. Keep in mind that a self-defense shooting seldom requires more than a couple of shots. The Colt holds 6.  The original Colt was available in various calibers such as the 32-20 and 38-40 which were also available in the Winchester model 73. The 44-40 also had that option though the 45 didn’t. That is a head scratcher. 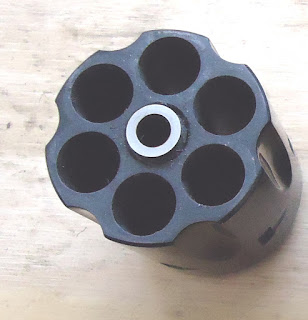 
Just out of curiosity, I wanted to see what was the size of the holes in front of the cylinder. If the holes are too small they will swage down the bullet before it enters the barrel which will have a negative effect on accuracy. I have seen that with some revolvers and their accuracy, or lack of, showed up. I found that all 6 ports measured .452 which is the correct diameter and one of the reasons for its good accuracy. I compared  the cylinder with a Ruger and a Freedom Arms model. The Colt was the smallest and lightest reinforcing my view that + P loads should be avoided in the Colt. For the life of me I can’t see beating the peacemaker with hot loads.


I can’t think of any downside to this gun except the price.  Suggested retail starts at $1400 depending on where you buy it. That would be stiff for someone of limited means.   It is also available in 44-40 and 44 special plus different barrel lengths though that might change. I would suggest a model with both cylinders.  If I tested another one, it would be in 44-40, which is a sweet caliber making  more attractive by offering a 44 special cylinder That might not be available in the future, a shame. If you are willing to lay out the bucks, I think that you will be well pleased with this model and based on the listed criteria I would recommend it. It carries on the proud tradition of the single action Colts very well.  For more info on Colt products, you can go to http://www.coltsmfg.com/Catalog/ColtRevolvers.aspx for more info.

The Colt New Frontier does not have any safety device to keep it from firing if dropped or bumped. All Colt Single actions and copies should only be carried with 5 rounds, (no live round under the hammer)