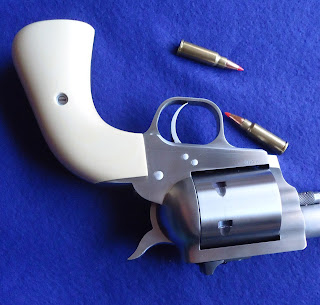 Freedom Arms 22/327
Freedom Arms has been making high quality revolvers for a number of years. They are known for their strength and tight tolerances.  They are chambered for a verity of rounds up to the 454 Casull.  I own a 454 and it is a work of art in regards to it mechanical features. 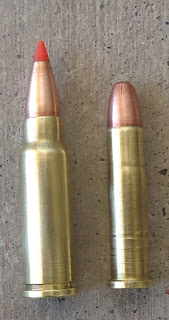 Recently they brought out a 22 centerfire based on a 327 Federal case necked down.  There are a few real bad ideas out there and this has to rank right along with the worst. You have a $2500.00 gun that shoots a bottleneck 22 based on a 327 Federal case necked down. That in itself is a job and with some brands case loss is high. In addition, they have to be trimmed and sized. Due to the tight dimensions they have to be perfect in order to fit. No one at this time makes factory ammo or formed cases so you are on your own there. That may not change. I don’t anticipate that sales will increase especially in view of the fact that there is no factory ammo available. An interesting chambering might be the 22 Velo Dog round. It is an obsolete round that was used over 100 years ago in a small double action revolver. Bicyclists carried it to protect themselves from roaming dogs. Just imagine today someone making a handgun specifically to shoot dogs. It was very underpowered and would more likely injure then kill a dog.   Today you would make cases out of 22 Hornet brass which requires a lot of work. If someone made the cases, reloading it would be pretty routine. It looks almost like a 22 RF mag except it is a centerfire. If you had good brass you could get some good loads because the gun is strong enough to exploit all of the potential of the Velo Dog round. In addition, it may not back out as the 22-327 does.
I fired the light loads and as with most revolvers chambered for bottleneck cases they backed out and jammed.   I tried a verity of powders and loads but most backed out tying up the gun. Even light loads caused that problem. Due to time constraints, I couldn’t do more research and this load listed works well so I will stick with it. I feel that with more time and perhaps a different gun I could have worked up better loads. It is accurate however. Also due to tight tolerances, cases have to be perfectly trimmed and sized which led to another problem. I had some cases separate which is usually due to excess headspace. I will back off the sizing die a tiny bit to see if that helps. I have worked with Federal and Starline cases and Starline is better suited for this task as the loss with Federals was very high when sizing down.  In addition, some of the 45 gr hollow points would not chamber probably due to the ogive so will stick with the Hornady 40 grain.  I tried 4 grains of Trail Boss and a 40 grain Hornady bullet and it worked pretty well. So that and 4227 seem to be the two best powders I have tried. Without a doubt there are other combinations that will work but I don’t have unlimited access to the gun. I have figured out how to make the cases fit and fire which was a challenge. 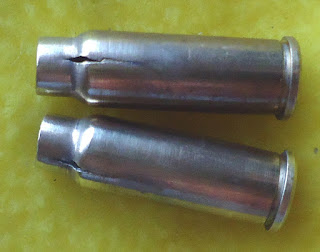 Case splitting was a common occurrence especially with Federal cases

The gun is a quality product which you would expect from Freedom Arms. Accuracy is very good and with the light recoil it is easy and fun to shoot. The trigger and sights are nice but I would not buy In my view it is more costly then what it gives. If you want an expensive toy then this might just be the item you need.  it One thing that may make it more attractive is to offer rimfire cylinders in 22 LR and 22 mag. That would add to the cost but at least you would be able to shoot it more.    Possible in their single shot as it would make a nice pest round somewhere in the neighborhood of a 22 Hornet load. That is why they make different types of guns. 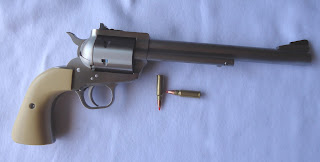 I didn’t have an opportunity to try cast bullets but they may be a viable option. If I paid $2500.00  for such a gun I would want as much flexibility as possible. 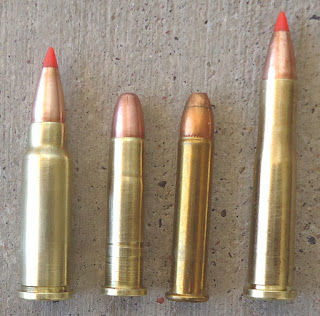 This seems really interesting. You people can take help from the MA Gun License to know about different guns and their uses to get proper licensing and their ownership if you are simply eligible of it. This can simply help you have the knowledge of using them wisely.

Love to learn how to handle a gun.