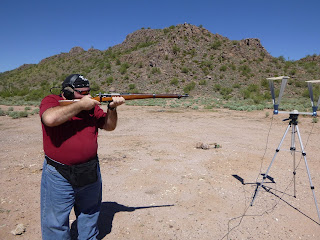 Military rifles are very accurate with the proper bullets

Everyone likes their rifles to be accurate and if it is then we are happy. However I submit that sometimes accuracy is overrated as compared to other factors.  Accuracy is the ability to hit what you are aiming at if you do your part. That can be hitting a gallon can at 50 yards or a woodchuck at 500 yards. If your gun can hit the required target at the desired ranges then it is accurate enough for the task at hand. In hunting accuracy isn’t everything. There are other important factors such as bullet performance. A well designed bullet is much more desirable for hunting then a gilt edge target bullet. Many target bullets while super accurate perform poorly on game. Some hollow points fold over when they hit an animal making them act like a solid which is frequently a bad idea. The Nosler Partitions had a reputation of not being as accurate as some of the other brands but they got the job done. I had the same experience but accuracy wasn’t that bad. Since then accuracy has improved. Some years ago I had an opportunity to work with a 270 Weatherby Magnum. The client was planning a bear hunting trip to Canada and wanted a bullet sturdy enough for the task at hand.  Back then there were not a lot of premium options like today. I settled on a Nosler Partition weighing 160 grains. The rifle has a lot of freebore, which was common at that time. In theory, it allowed a heavier powder charge hence increasing the velocity. The problem is it has a negative effect on accuracy. Likewise, the Nosler wasn’t known for accuracy either. In spite of playing around with loads and seating, the best groups at 50 yards were 2” but 3” was more typical with a 3 shot group. The client was somewhat concerned but since shots would be on this side of 50 yards, he went with it. In the end, he tagged a nice bear at a distance of about 35 yards. While accuracy would seem dismal by most standards, it was good enough to do the job. 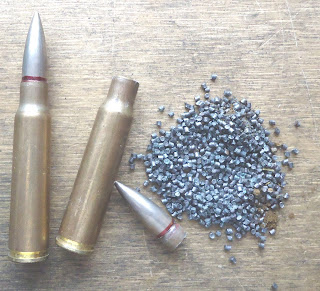 If you are hunting in the brush or woods for game such as a moose or grizzly bear your shots probably won’t be over 50 yards maybe a hundred at the most. With those animals you need a hard hitting rifle with a quality bullet for best results. A 45-70 with a well-constructed bullet weighing 400 grains that group 3” at 100 yards is all you need for accuracy purposes. With that type of hunting you will probably be standing or at best have a haphazard rest, so gilt edge accuracy isn’t necessary. You might even be shooting at a moving target. You need a combo that will place a sturdy bullet into the boiler room, breaking bones along the way if necessary. You want to do your hunting before you shoot not after. Some of the new lead free bullets made by Barnes and Hornady might be an option worth exploring. I have loaded some of the LBT type of bullets for customers in the 45-70 and 444 Marlin. The 444 weighed in at 325 while the 45-70 checked in at 400 grains and they both bagged fine grizzlies. 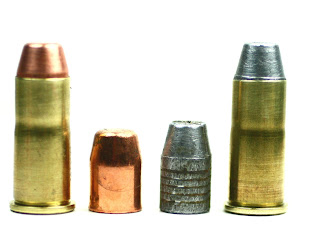 Home made bullets for the 9.4 Dutch are accurate in guns tried

If you are hunting deer at a couple hundred yards or so then you would need a different type of rifle. Something that shoots flatter and can shoot a 3 shot group at 100 yards of an inch or so. If it is more accurate fine but don’t get hung up on that. You need a good hunting bullet with good flight characteristics rather then a super accurate target bullet. The bullet has to perform on the animal to obtain a clean kill. It has to have the ability to get into the boiler room and do some significant damage in order to insure a clean kill. A bullet that blows up on the hide without penetrating is useless.  As with all hunting the first shot is the most important and it’s our moral obligation to humanely dispatch any animal that we shoot. If you mess that up there is a good chance that the hunt will go south quickly. If you hit it badly or miss it the animal isn’t going to stick around for you to target practice on it. Therefore, when you shoot your groups be sure to carefully observe where the first shot from a cold barrel goes. Keeping the barrel oil free helps keep the first shot closer to the rest of the group as oil can throw off the first shot by quite a bit. 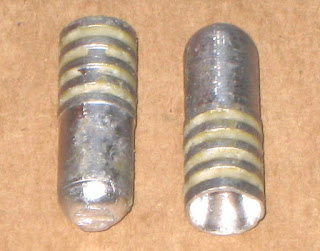 Over the years shotgun slugs have greatly improved in performance. The old pumpkin ball was good out to 50 yards or so before accuracy deteriorated too much. Slugs such as the Breneke and Actives extended that range out to about 100 yards in good guns. They were all smooth bores but with an open or modified choke and a scope 3 to 5” groups were possible at 100 yards. Then came rifled barrels and modern projectiles which changed everything. One outstanding example is the Lightfield brand of slugs www.lightfieldslugs.com. Not only are they exceptionally accurate in a rifled barrel but the various loads hit to the same point of impact. The importance of that is a shooter that is more recoil shy can shoot a lighter load while the heavier load can also be utilized without changing the scope setting. My son has a Remington 870 with a rifled barrel. With a scope at 80 yards we can get 3-4” groups which doesn’t put in in the tack driver category but he bagged a nice black bear in Canada at 60 yards. We were using a handload I developed using Blue Dot powder with a velocity of 1700 FPS. No they were not much fun to shoot off the bench.   I am not aware of any other slug that can do that though there are other accurate slugs out there. I have shot the Remington slug with good accuracy results also. With the increased velocity and accuracy of modern slugs ranges of 175 yards and more are possible given hunter skill.

Shooting varmints at long range does require serious accuracy. Most of the time you will be using a small caliber high velocity rifle capable of shooting bullets up to 4000 feet per second or so. A groundhog at 400 yards is a very small target. A rifle the shoots 5 shots into a half inch or less at 100 yards is needed. Groundhogs are relatively small but need to be hit well with an explosive bullet in order to anchor them reliably. As with all animals they deserve a quick and painless death. 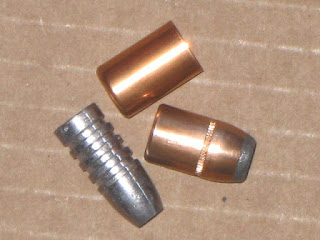 Home made bullet is accurate and effective


When you read about handguns used for self defense one of the more prominent features mentioned is accuracy at 25 yards. If it doesn’t shoot a 2 or 2 &1/2” group then it is considered substandard. While that type of accuracy is nice there are more important features to be considered in a social handgun. First of all it must be 100% reliable at all times. Anything less makes it a target gun or paperweight. It also needs the ability to digest good working ammo that is useful for self-defense.  Other features more important then gild edge accuracy is ease of use such as a good trigger, comfortable grips and decent sights. It needs to have the ability to get into action quickly and have a round with enough power to do the job. If the weapon meets all of that criteria then you can worry about 2” groups. Keep in mind that few people can shoot that well especially under duress.

For firearms and armors accuracy is really important. You people can take help from the MA Gun License to get the guns and firearms according to your requirement with proper licensing. To maintain quality of work, accuracy and precision are simply required so that the target could be reached without hurting or harming others.

I wish I could can own a gun someday
Pipe Lining

wow! nice gun and nice informations. i learn a lot. thanks for sharin g this
Surprised at BlackCloud Dodge Clutches