Straight Pull Rifles Part 2
The 8 X 56 is an upgrade of the 8 X 50. The cartridge is more powerful and bullet diameter was increased to 329. It employs a 5 round clip which is fed from the top and drops down through the bottom when empty. The inventor of the model 95 was Ferdinand Ritter Von Mannlicher who also came out with the first successful clip fed rifle. Like the 8 X 50 it is hard to operate unless you have strong forearms. The extractor also had a reputation for breakage unless you kept it clean. The rifle was used in WW ll by second line German troops as well as Romanian, Yugoslavian and Italian reserves. Other countries used it to an extent. In the 1970’s some African guerillas used them in their campaigns. There were about 3 million produced and they are fairly common and inexpensive. They are also well made weapons made to last. For the collector who is just starting this might be a good place to begin. 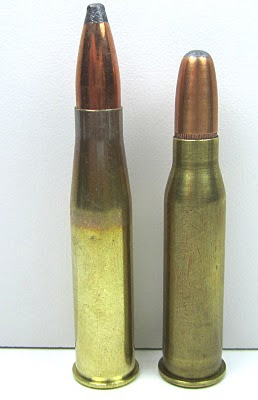 The 8 X 56 rifle I have looks a lot better then the older 8 X 50 but share the same action. The cartridge was designed in the 1920’s to replace the 8 X 50. Hungary adopted it in 1931, also being used in the Solothurn machine gun. The Hungarians also used a model 35 bolt action for it. In 1940 Hungary adopted the German 8 X 57 and some of the rifles were adopted for same. They were rechambered and a different magazine was employed. The Nazis however did produce ammo for it in the 1930’s. I have shot some of it and it was surprisingly consistent considering its age. The bullets I used are .329 to .330 in diameter. Why they used that diameter instead of the more common .323 diameter is head scratcher as the 323 is much more common and available. Some I made as I wanted different weights and styles then what’s available commercially. I make many of my odd diameter bullets by swaging because they aren’t available in all diameters and weights that I use. There are some commercial bullets available for the handloader in soft points which are good for hunting. Like the 8 X 50 it sports a 20” barrel which is handy though a 30” barrel was also made.. Just for your information there is an 8 X 56 rimless case that is based on the 8 X 57 Mauser case. Just to keep you confused there is also an 8 X 56 Kropatachek which isn’t interchangeable with either of the other two 8 X 56’s. That is why it is important to know what your rifle shoots before trying it out. Using the wrong ammo can be a disastrous mistake.

The rear of the rimless Mannlicher measures about .030 smaller then the rimmed version. DO NOT fire in the straight pull rifle. The rear of the case wouldn’t be supported and would rupture probably causing injury. That’s why it’s so important to make sure you are using the correct ammo for your weapon something that can’t be repeated too often. You might encounter a 95 that was rechambered for the 8 X 57 Mauser round which is less common then the 8 X 56 R. This round is a good large game hunting round and can be used for deer and black bear. I have a client that uses in on wild boar in Florida with good results. Reloadable cases are available at Graffs and other distributors. In a pinch 7.62 X 54 Russian cases can be use but they are short and not necessary because of the brass supply available.


The 8 X 56 I have is in good shape and will handle some pretty decent loads though I didn’t try and set any speed records. While it is a strong action it isn’t getting any younger so I took it easy in load development and I suggest you do the same. Since the straight pull lacks the camming power of a conventional bolt it would be more difficult to extract a sticky case. The trigger is a fairly typical military type which is ok once you get used to it.
Posted by Bob Shell at 4:33 PM