The Swiss model 89 came out in 1889 to replace the older 10.4 Vetterli. The original load was a .299 diameter 213 grain bullet at about 1950 FPS loaded with semi smokeless powder. Later a 190 grain jacketed bullet was utilized with smokeless powder. The 89 has a long receiver and rear locking lugs. Also a 10 round magazine protrudes from the bottom. Pressures were limited to about 37,000 PSI and should not be exceeded. The case is essentially the same as the later case, model 31, but the neck is shorter. It was replaced by the model 11 in 1911 which served for quite a few years in the Swiss military. The Swiss rifles, as you would expect are well made and finished. That applies to all of them from the Vetterli on up to the model 1911. Both Swiss models have a large ring on the rear of the receiver. That is so you can let down the firing pin without shooting it. You can cock it using that ring easily. The button on the side releases the magazine and is easy to use.


I have worked up some loads for the older Schmidt Ruben rifle. The example I used was made in 1893 and is in good shape. Mine shoots 308 diameter bullets but I strongly suggest that you slug your barrel to be sure of the correct bullet diameter. The older ones have a .299 diameter bore so you can use 7.35 Carcano bullets in those. You just need the proper die set. At no time did I attempt to see how fast I could drive the bullet but rather looked for loads that were accurate and safe. For some reason I couldn’t obtain the Swiss brass so I used 284 Winchester cases which worked fine. That situation has since been resolved and the Swiss brass is available now. First I necked them up then trimmed off some of the neck to the 53.5 length then sized as normal. This rifle required that the cases be chambered with some authority or they wouldn’t fire. That’s a good safety feature since the bolt wasn’t completely locked up and I wouldn’t want it firing with a partially closed bolt. The difficulty may have been because of minute dimensional differences in the 284 cases. After they were fired and sized they fit easier as that formed them to that chamber. During the tests I had no malfunctions or brass loss and some of the cases were fired several times. The cases are thrown several feet due to the good extractor and the effort required opening the bolt. The sights are however hard for me to use and getting groups was difficult at least for my eyes. However I didn’t have much trouble hitting cans at 50 yards though it shot low. Go figure. The trigger pull isn’t bad at all for such an old rifle. After the usual travel it broke consistently.
LOAD BULLET VELOCITY COMMENT
10 X Unique 110 grain round nose 1447 fair
10 X Trail Boss 110 grain round nose 1141 consistent
25 X 5744 110 grain round nose 1949 nice
42 X IMR 4895 123 grain soft point 2341 poor load
50 X H 4831 150 grain Hornady 2151 mild
52 X IMR 4350 150 grain Hornady 2516 accurate
40 X IMR 4895 150 grain Hornady 2498 also good
10 X Unique 165 grain cast 1280 consistent
48 X H 4831 170 grain round nose 2039 mild
50 X IMR 4350 170 grain round nose 2178 ok 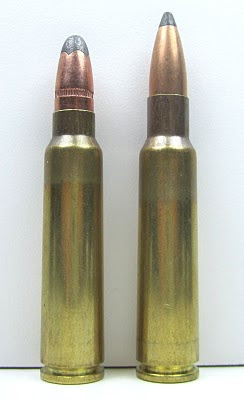 When judging a rifle by its strength there are other factors to consider, probably the most important is its ability to handle gas in the event of a case rupturing. If the head splits, while not a common occurrence, where will the hot gases go? Information is scarce on some rifles so it’s a matter of common sense to make sure you are using the correct ammo and wearing shooting glasses. I prefer to forgo having hot gasses sprayed on me, been there done that. The hot gases have to go somewhere and it may be your face and injure you seriously. Forends and magazines can be blown downwards causing serious arm and hand injuries. The Swiss rifles aren’t the best for handling gas so keep that in mind when loading ammo especially for the older ones. Another thing to avoid is standing along side of some one shooting for if a firearm does explode shrapnel frequently goes to the side causing serious injuries to bystanders. Revolvers and shotguns are notorious for this. You must remember that black powder guns generally have a pressure of 20,000 PSI or so while smokeless arms start at around 35,000 PSI. That’s a lot of pressure to deal with when something goes wrong. In this case I am referring to rifles rather then shotguns and handguns which typically operate at lower pressures. Normally if you are using quality brass in the proper chambering you should be ok but there are no guarantees in life or in shooting. If you notice a bulge on the case I suggest you stop shooting and find out what’s going on. It could be an oversize chamber or the wrong case. Either scenario can be dangerous as it can rupture. I have encountered military rifles with badly oversize chambers on a number of occasions. Some of the Japanese rifles made at the end of WW ll are very shoddy and dangerous to shoot for an example. They are easy to spot and not very common now. If in doubt take it to a qualified gunsmith. Sometimes it is hard to extract a shell out of such a gun. I have one such example in my collection now the cause being a rough chamber. You can rebarrel it if you want to go to that expense or use it for a wall hanger.

If you get a model 89 in good condition it is worthwhile to make ammo for it and go have some fun. Like most straight pulls you will have an opportunity to strengthen your forearms. It is accurate given good rifling and enjoys the justly famed Swiss quality.