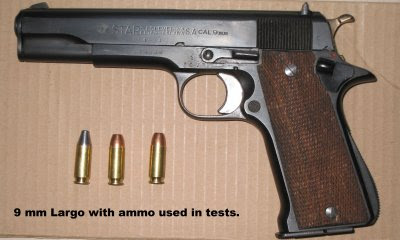 9mm Largo
Brought out about 1910 it is essentially an elongated version of the 9mm Luger. It closely resembles a 38 auto but not as much rim. It was used in the Astra 400 but many copies of the Browning pistol design utilized it also. The Spanish used it for quite a number of years. It is also known as the 9mm Bergman-Bayard long. The Danish used it as a military sidearm for quite a few years. By the way the Astra 400 is supposed to chamber and shoot a 38 auto but my Largo absolutely will not. The auto rim is too prominent. There is some military ammo available but it is corrosive and I for one will avoid it. The cases would be Berdan primed making it useless for reloading. With inexpensive brass available why bother with the military. No American company makes ammo for it as far as I know. 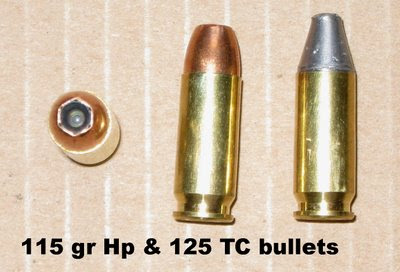 My sample is a Star Modelo Super closely resembling a model 1911 Colt. Actually that was a main reason I purchased it as I am a big fan of the 1911 design. However it has a couple of features lacking in most 1911’s. First of all there is a loaded chamber indicator that shows red when it protrudes. It also has a 3 position safety with the middle position locking the trigger but allows you to rack out the ammo. That’s a good feature but of course the gun should always be pointed in a safe direction as like any other gadget it can fail. It does stay open upon firing the last round which is an excellent feature. Another feature which I consider a poor idea is the gun won’t fire without the magazine in it. There may be some disagreement in that but I would prefer a pistol that fires without the magazine in it. For informal target shooting it doesn’t make a difference though in a bad situation it might. The magazine is dropped out like a 1911 and they are easy to drop and replace. The sights are decent for a military or police arm but the trigger is too heavy. Maybe a trip to a gunsmith could cure that ailment though I am not familiar with the trigger mechanism. It lacks a grip safety which I don’t consider a problem. The grips on my gun are sharply checkered wood which would aid in gripping especially with a sweaty hand. It is a well made gun that is comfortable in my hand with no problems with recoil. For the price I consider it a good buy. I bought it at Sarco for about $140 and with 3 magazines plus shipping it totaled less then $200. It gives the appearance of a rugged well made firearm. 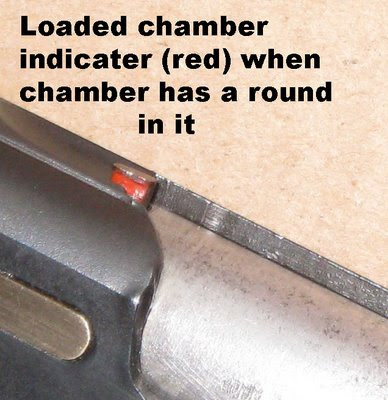 Shooting it wasn’t a problem. Starline makes the brass and standard 9mm bullets work fine. The first batch were 115 grain full metal jackets and seemed a bit fussy about feeding until I sized then again. I then tried some 115 grain hollow points and they fed flawlessly (go figure). I even loaded some 125 grain cast truncated bullets and they were about 98 % reliable. The load for all three was 5.5 X 231. Since it burns clean and gives good velocity I left it there. Increase these loads at your own risk. Since there are a verity of guns out there and reloading techniques out there I am not responsible for use of this data. 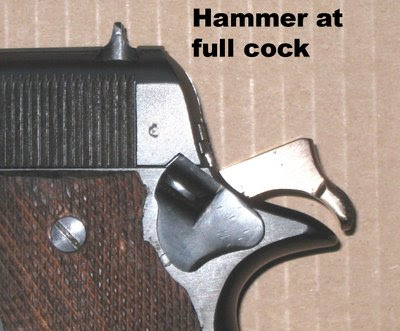 I am not a big fan of the 9mm for self defense but realistically if you use a well designed hollow point it should do the job. A 115 grain Hp at 1300 feet per second should do a pretty decent job getting you out of a scrape. I wouldn’t use FMJ’s as they don’t expend and might over penetrate. If you choose to use it for self defense try out a verity of bullets to see which one feeds best and after that then you can check for expansion. There are several good bullets out there that might work for you. Sometime when I get some time I might try my X/PLODER bullets in it. I should get close to 2000 feet per second with them. If it was going to be a house or carry gun for me then I would look into getting some trigger work done. Keep in mind that any gun used for defense has to be 100% reliable or it’s worthless. It is a full size gun which would make it a good house gun with the proper loads. It would be similar to carrying a 45 auto by weight and size. In which case I would opt for the 45. 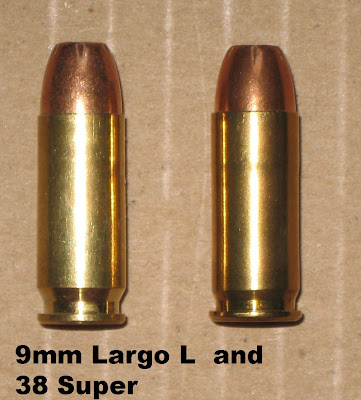 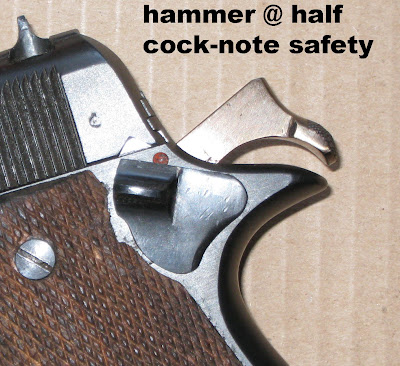 After shooting it some more it became more familiar but the heavy trigger made it difficult to shoot as accurately as I think that it can. All in all it is a serviceable piece and is well worth obtaining. It can be called a poor man’s 38 super as the ballistics are very similar as well as the case size. The only difference is the rim size with the super having a bit more rim. I could possibly squeeze a bit more speed out of it but what’s the point. I am happy with these loads and there is no upside to a few more feet per second. These loads function and feed perfectly and thats all I can ask of this pistol.
Bob Shell 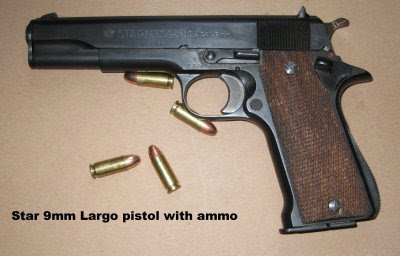 You can still find the CCI stuff on gun broker. The CCI hollowpoints and TMJ's. Thanks for the great blog. Swing by my gun forums and chat with us...www.gunforum.darkbb.com

Modifying the Modelo Super to take .38 Super is fairly easy, and expands our brass options. However, I find the Georgia Arms .38 Super load too hot for this pistol. After shooting a few, I decided to pull the bullets and reload to more moderate level. I have now acquired 200 cases of 9X23Win, and am loading to proper 9mm Largo level. I am currently loading a .356 lead round nose for range work (first test tomorrow!), and have .356 FMJ on order. My preferred powder at this time is Bullseye, as I have about 12 pounds of it.
This pistol shot quite good with the CCI aluminum-cased Blaser ammo - I hope for better in my handloads.

Hi I just want to know how much is your 9mm star.