The Other Carcano
In 1891 Italy produced their first modern military rifle replacing the Vetterli with a 6.5 caliber Carcano. The rifle was developed by Lt. Col. Salvatore Carcano and Col. Parravicino both who worked at the Torino arms factory in Turin. The original caliber propelled a 6.5 mm 162 grain bullet at approximately 2300 feet per second. For that time it was a decent load which compared favorably with other 6.5’s of the same period. Pressures were kept pretty mild around 38,000 PSI. or so. Anyway they kept that chambering until shortly before WW ll when they went to the 7.35 chambering. That chambering fired a 128 grain slug at 2480 feet per second which to me was inferior. To me the 128 grain slug has less sectional density so wouldn’t penetrate as much as the 6.5 would. Be as it may be the 7.35 came out but WW ll cut it off and they went back to the 6.5 due to supply considerations. In fact some of the 7.35’s was rebarreled to the 6.5 caliber. The 7.35 is merely the 6.5 necked up with no other changes to the case. The 6.5 is by far the most common and famous. The rifle that shot J.F.K was a 6.5 Carcano and at that time they could be bought through the mail for about $20. Ah the good ol days!

A fact not well known to everyone is that some Carcanos were made in the 8 X 57 Mauser chambering for the African campaign. The logic I suppose was to simplify ammo supplies with the Germans. I am not sure exactly how many were made but they are not real common today as is the other 2 chamberings. I heard that about 50,000 of those rifles were manufactured. The 8 mm is seldom mentioned in references regarding the Carcano or in other references on WW ll weapons. When it is it’s usually just a footnote. As far as I know it saw very little or no actual combat use in Africa or anywhere else. I do believe Hunter’s Lodge sells them, for those who are interested, and occasionally they appear at gun shows which is where I obtained mine. They advertise in the Shotgun News which is a good source to get military rifles and supplies. One of the problems which plague this as well as some other military rifles is the difficulty in getting a clip. It takes a special clip as the cartridge body is larger then either of the other Carcano rounds. Finding a clip would be like hitting the lottery. Like the other Carcano chamberings it can be fired single shot though it’s a slow process. To fire the 8mm single shot the bolt has to be removed and a cartridge inserted into the bolt head and replaced in the gun. Since I don’t plan on picking a fight with a gang with this rifle single shot isn’t a major hassle. While possible it’s not real easy to scope a Carcano. It would have to be a side mounted affair because of the clip going through the top. It might be worth while to scope a 6.5 but I would never do it to the 8 as they aren’t nearly as common.

Everyone knows that Carcanos are not as desirable a collector item as some other military pieces. Some folks consider them junk and shouldn’t be shot or kept for that matter. Of course that’s nonsense. Anyone that has come to that conclusion hasn’t taken the time to shoot or examine the Carcano in any depth. While not as strong as a Mauser or Arisaka they are adequate if fed properly. No military authority is going to issue a piece of junk to their troops if they expect to win a war. The metal finish is decent though somewhat crude and the wood looks rough but serviceable. The rear sight is non adjustable except by a file but the samples I shot are fairly straight on at 50 yards. Like all Carcanos I have seen the caliber marking is just in front of the front sight in this case it says 7.92. I wouldn’t challenge anyone to a shooting match unless we were both using Carcanos as the sight is crude. They are handy to carry and fairly light, though the magazine sticks out the bottom and if on can be used for hunting. I have shot a lot of ammo in all 3 chamberings and never had a malfunction. Of course I didn’t try and make a magnum out of any of them either. The bolt comes out by pulling the trigger and pulling the bolt out as in the other Carcanos. The extractor is adequate and the ejector located directly below the bolt seems pretty sturdy. The safety locks the bolt and holds the firing pin and it doesn’t seem particularly hard to use. To engage the safety push it forward and up. The locking lugs seem to be a pretty decent size and the bolt handle also acts as a safety lug, to a certain extent, in case the other two fail. There is a small hole in the bolt that may vent some gas in case of a case failure. I don’t know how good it would work but a ruptured case is unlikely especially using proper ammo and a gun in good shape. The trigger is simple and reliable being typical military. After shooting and examining these actions I don’t see where they are so bad if proper ammo is used. I did a project recently where I shot a lot of ammo in the 7.35 and never had problems of any kind. The worst feature in the Carcanos is trying to shoot it without a clip. The clip does however work fine as I have a couple for the 7.35.

Having said all that I would not fire any 8mm military ammo in it as it’s almost certainly too hot for that action. I have some military ammo that I chronographed in my 23” barrel 98 at just about 2900 feet per second with a 150 grain bullet. I imagine the pressures have to be around 50,000 PSI. or so which is way too much for the Carcano. 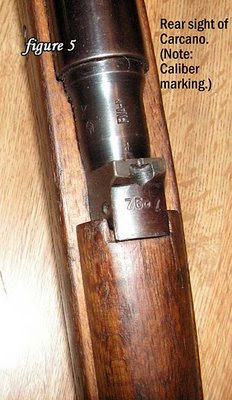 Loads for this gun should be kept mild. One source is using the minimum loads in loading manuals for the 8 X 57 Mauser. Here are some loads I have used and can recommend. If I was going to take this rifle deer hunting I would probably use the Hornady 170 grain flat nose and tweak the load to shoot to the point of impact with the original sight and use it as a single shot unless I found a clip. Since I hve no control over loading procedures I have no responsibility for its use. Use at your own risk & do not exceed.
LOAD BULLET VELOCITY COMMENT
10 X Unique 125 grain Hornady 1459 fair
50 X IMR 4350 150 grain Hornady 2379 mild
9 X Red Dot 165 grain cast 1241 accurate
10 X Unique 165 grain cast 1357 also accurate
47 X 748 170 grain Hornady 2374 favorite 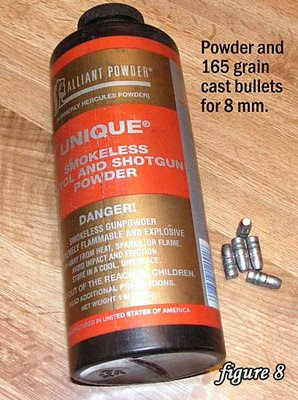 The 8 mm Carcano is an interesting part of history even if it didn’t play a significant roll in the African campaign. While I do shoot mine on occasion I consider it more of a historic relic to look at and show other interested folks.
Bob Shell