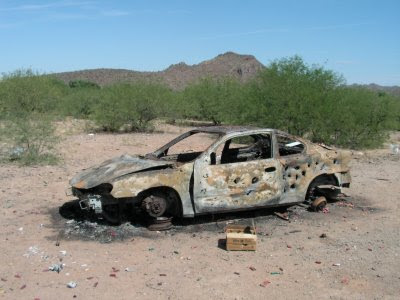 Gun Vandalism
On both sides of the border we have politicians and various groups trying to take away our gun rights anyway they can. They are determined and well financed and don’t intend to quit until they succeed. Most of the media both print and TV are against gun ownership by law abiding citizens. Don’t bother them with facts as they have their agenda and are going to run with it. Hunting is also under a mindless assault by the same people.


The problem lies with a small segment of the shooting community is bound and determined to help these people to take our rights away. They will talk about their rights while their actions are destroying them. The folks that I am referring to are the gun vandals. They only make up a very small percentage of the gun owners but their voice is heard all out of proportion to their numbers. These are the jerks that go up and down the road shooting road signs and other property. They have no regard for life or property as they are just living for the moment. I feel that I am on safe ground when I state that many are drinking during this activity. That in itself is a cardinal sin. Guns and alcohol should never mix. First of all gunpowder and alcohol don’t mix very well and it taste lousy. When you shoot a sign you have no idea where the bullet will end up. There may be a car coming toward you or a house down the road. A high powered bullet can easily travel two miles and a sign won’t slow it down much. Another problem is poachers. When the public hears about poaching especially rare species then all the hunters get blamed. My advice is if you see poaching going on report it to the authorities. If we don’t clean our house some else will do so and we might not like the way they do it. Imagine a hiker finding deer carcasses in the middle of the summer and how they will feel about hunting. 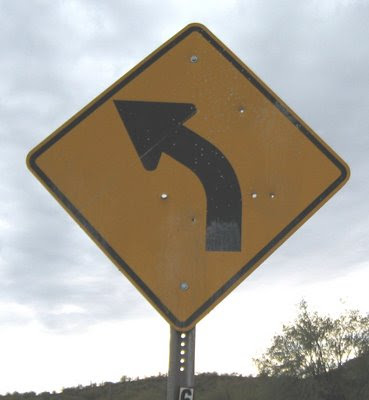 After this sign was shot where do the bullets go?

Let’s take a hypothetical situation and see what happens. It is a fact that about 60% of the population doesn’t have a strong opinion on gun ownership either way. However events can make them go to one side or another. Suppose John Doe and his family decides to take a drive on a country road. As they go along they see all the road signs with bullet holes in them. What do you suppose they are going to feel about gun ownership? They know that they the taxpayers have to foot the bill to replace those signs. That is a reflection on all gun owners including the responsible ones. Now suppose that some gun slob is shooting at a sign and a stray bullet goes through his windshield and narrowly misses one of his kids in the back seat. I guarantee that you just created another rabid anti gun family. If some one is struck they might become activists in the anti gun movement and no amount of dissuasion will change their minds. 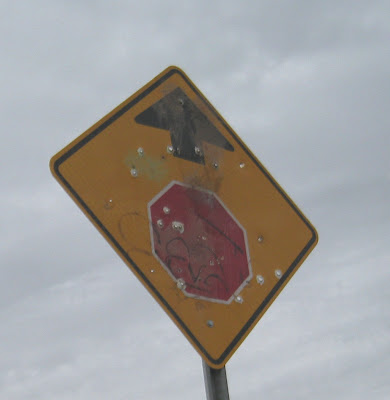 
Like any other sport how we conduct ourselves will influence the public in various ways. Another no no is to put tin cans or bottles on a body of water and shoot at them. There are at least two reasons for that. First it litters the body of water both above and below. The other thing is bullets will ricochet off the water endangering everything around. There may be buildings, livestock or people in the area. Let’s suppose that the Doe family along with some friends is on one side of a pond having a picnic. You come along with a few bottles and throw them into the water and start shooting at them. Pretty soon bullets start flying all over the place narrowly missing the picnickers. You will ruin their day hopefully without hitting anyone and guess which side of the issue they will be on.

When people drive down a road and see this vandalism they don’t appreciate it. There are instances where mail boxes and buildings have been vandalized this way and there is no excuse for this behavior. Shooting at birds on telephone wires is another situation that shows that some people don’t deserve to own a gun. Another turn off is some people target shoot out in the boonies. There is no problem as long as you are not trespassing and leaving litter. We all shoot cans and bottles and various other targets but we should clean up afterwards because if the owner has to he will close it for shooting. You should never shoot glass containers of any kind as they leave a dangerous mess.


What are we as responsible gun owners to do? First of all we need to conduct ourselves in a manner above reproach. I would sincerely hope that anyone reading this magazine doesn’t participate in this activity and if they do stop it immediately. Think of what you are doing to this great sport before you pull the trigger. We can educate new and non shooters as to what we are about and spread the word. If we observe someone committing vandalism or poaching then we should notify the authorities. The punishments for these offenses can be fairly severe and it may stop some people from repeating these violations.
We have to remember that this is our sport that we love and we need to step up and do the right thing when necessary.
Bob Shell
Posted by Bob Shell at 2:44 PM

Amen to that Bob; you are right on target with this blog. I have also seen the same type of vandalism around the Phoenix desert areas. Not only abandon/stolen vehicles all shot up, but people bring out old TV's, computers, refrigerators and all sorts of other trash, shoot the hell out of it and leave it there!
(Good place to find reloadable brass though)
I personally don't like to shoot in these trash sites in fear that anyone venturing onto these backroads may suspect me of doing my share of this littering. I am sure that you must have seen the news on TV that Maricopa County Sheriff, Sheriff Joe, was intending on monitoring several places and arrest suspects of littering in the desert. I have not personally witnessed any gun vandalism/littering of makeshift targets, but if I did, I would be compelled to report it.
I enjoy going out in the desert, to safe shooting locations and doing some target shooting or testing some new loads and would sure hate to see some of these areas closed, but I fear that the more trash/targets are hauled out there and left, they will soon be closed. I guess Ben Avery range will eventually be the only place to go.

A small minority? Yah, right. This is the same thing that the offroaders say.

I call BS. As an active outdoorsman,I can tell you that there are a lot of bozos out there pretending to be responsible gun owners, but just about every hunting camp I come across is a mess.

Shooting in the desert in unmanaged sites is damn dangerous and few of the people doing the shooting are practicing range safety.

Yup, if anything is going to deive the push towards more gun control, it is the lack of control demonstrated by gun abusers.

You have been warned.