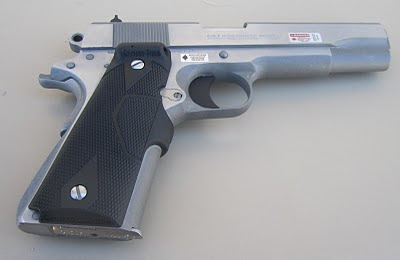 Colt Delta Elite
Introduced in 1983 by Jeff Cooper who was looking for an effective round for self defense and some hunting possibilities the 10 mm was brought out. Norma produced the ammo and the pistol was a Bren Ten. The FBI tried it for a short period of time after the 9 mm let them down in some shootouts but determined that it has too much recoil and muzzle blast for some agents. They shortened the case and it became the 40 S & W which has become more popular then the more powerful 10 mm. Colt brought out the Original Delta Elite in 1987 but it didn’t catch on and after a few years was dropped. They are now prized collectors items fetching more now then when they were new. There are 10 mm autos that hold 15 rounds but if you can’t solve your problem with 9 then I doubt that the extra 6 will help. Also they have a larger grip which may be too big for someone with smaller hands.
I have a friend that has an original Delta Elite that he has had some custom work done to it. On the outside it looks like the re-introduced version by Colt. I have shot it a number of times and it is a joy to shoot. 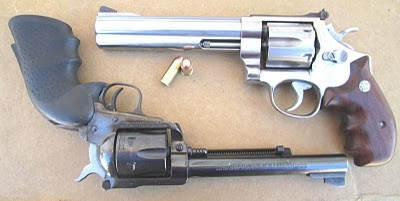 
First impressions were positive of all the people that shot it. When I test guns I like to get as many opinions as possible for a fairer overview of the gun tested. My friends wife fell in love with it so after the testing is done it will be interesting on who ends up with it. Like most test guns Colt will either want the gun back or payment. I can tell you that it will never see the inside of a Colt building again. Some of the features include: It looks and feels like a standard 1911 in 45 auto which is one of my very favorite pistols. It is a good looking and well fitted piece such as you would expect from Colt. The 10 mm cartridge is quite powerful making it usable for some big game hunting as well as self defense. Most people who hunt with a handgun consider a 200 grain bullet launched at 1000 FPS to be about the minimum for consistent results. The 10 mm will easily achieve that with a good handload. Finding factory ammo can prove to be a challenge though not impossible. Brass availability can be spotty though some patient searching can produce results.
White Dot Sights
Aluminum Trigger
Combat Hammer
Original Roll markings
8 + 1 Capacity
Wrap Around Rubber Grips with Delta Medallions
Chambered in 10mm
80 Series Firing Pin Safety System
Bullet selection is pretty decent with weights from 135 to 200 grains from various makers. Cast bullets may also be an option. Even though it is a bit much for self defense there are some nifty 135 grain slugs available which can be driven at some impressive velocities. The 135 grainers should also be an awesome small game and pest load. There are some 180 grain full metal jacket bullets which might be good to carry in bear country. The 180 to 200 grain soft nose and hollow points should be effective on deer size animals at closer ranges. I used Starline brass in all of my shooting and as usual it performed in a flawless manner. Starline makes quite a few calibers and for more info go to www.starlinebrass.com Brass is available from other makers such as Winchester, Remington and Federal though supply may be spotty. All of your bullet makers make bullets for the 40 and 10 mm. Maximum loaded length is 1.27 though it might vary from gun to gun so I would recommend you check yours for length before you load too many rounds. Different bullets might also have different seating requirements. For self defense or hunting ammo I would suggest you manually work all of the rounds through the gun. That goes for any semi no just the Delta Elite. I obtained a set of Crimson Trace Laser Grips which are not only comfortable but useful. I obtain these for most of the handguns I test because of their comfort and utility. I highly recommend them especially if you feel that you may have to shoot in low light. I have a set on my 44 mag because some places I go night hunting is legal. For more info go to www.crimsontrace.com 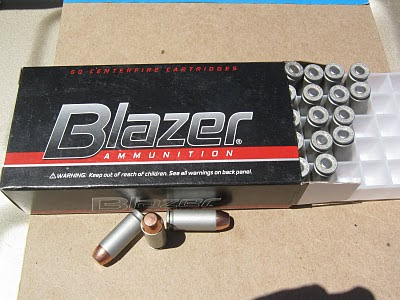 
When shooting the Delta Elite I want to test the flexibility as well as the maximum safe loads. For general shooting cast and plated slugs will save you some bucks plus they are generally as accurate as jacketed bullets. The 125 grain X-Ploders are bullets that I designed some years ago with the purpose of self defense without endangering targets not involved. They easily come unglued at those high velocities as well as causing massive tissue destruction. They also reduce recoil somewhat because of their light weight. The 10 with a good 180 grain bullet should suffice for deer and similar size game. If I was in bear country the 10 would get the nod over the 45 ACP because a 200 grain bullet will out penetrate a 230 in the 45 ACP given same construction. . Extended shooting will cause the beavertail to take a little skin off of your thumb webbing. Keep in mind that this isn’t a kinder gentler handgun but a full performance weapon that is capable of harvesting big game. The energies for some of the max performance loads will be in the 650 Ft Lbs area which is nothing to sneeze at. The recommended working pressure, from SAAMI, for the 10 is 37,500 PSI which is pretty hot slightly exceeding the 357 Mag. The case is not a large capacity type so if you are working with max loads work up very carefully. A half grain of powder can make a very large difference in pressure. I used Winchester large pistol primers for all of my loads. The loads that I have listed as max should be approached with caution. I suggest that you start 10% below and carefully work up. We had a case rupture using a max load with the 125 grain X-Ploder. I ruined the magazine and left a powder burn on the shooter’s hand. Thankfully he was wearing shooting glasses. The 5 X 700 X load was nice but it didn’t always function the slide so I would add another half grain of powder. The purpose is to have a mild target load for a recoil conscious shooter. Cast and plated bullets are great for target shooting and will reduce the cost of ammo.

A couple of the available bullets for the 10 mm


Some years ago I obtained a Ruger Blackhawk that has a 38/40 and a 10 mm cylinder which should make for some interesting comparisons between the two. It was a special run offered and happily I had the sense to buy one. For this test I also made some custom bullets to see how the 10 would react to them. The 38-40 is a 10 mm revolver probably the first one ever brought out. With this modern revolver some impressive ballistics can be obtained.

Shooting the gun showed that the recoil was fairly heavy but manageable to anyone with some handgun experience. I received a set of Crimson Trace Laser Grips and they fit on with no problems. As usual they were comfortable to shoot and worked well. For some who anticipates shooting in low light these grips should be installed on your handgun. 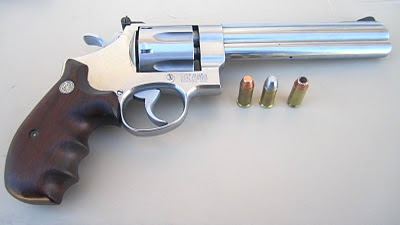 
A client of mine has a S & W model 610 in 10 mm auto with a 6 &1/2” barrel. Not a common gun by any means. Anyway he doesn’t like using moon clips which would be necessary to prevent the rimless case from going too far in the chamber. He wanted me to make a rimmed shell for the gun. As far as I know there is no such cartridge as a 10 mm rimmed so I started from scratch. The 41 mag case was swaged down to 10 mm which at that stage would make it a 401 Herter’s Power mag. I then shortened to 10 mm length and sized it as normal. They shot fine and ejected perfectly. I did find that if the rim was a bit thin it would misfire. A vast majority worked fine and you can discard the thin rimmed cases. I chronographed a few keeping in mind that it isn’t my gun so I kept them mild.
LOAD BULLET VELOCITY COMMENT
6 X 231 135 grain plated 1254 good load
8 X Herco 135 grain plated 1137 accurate
7 X Herco 155 grain Plated 936 mild
6 X Herco 170 grain cast 920 nice

I could have easily exceeded these loads but I will let the owner decide how he wants to feed the gun. You can use 10 mm loads but you have to keep in mind that the 41 mag cases might be thicker at the bottom so you might want to start mild and work up. I have used hotter loads in my 10 mm Blackhawk with no problems using the 10 mm auto cases.


Accuracy with the Delta Elite at 25 yards was quite good with most loads. Careful shooting produced groups of 1 &1/2” or so from an informal rest. Keep in mind that we used full power loads for our accuracy testing which makes it more realistic.
Posted by Bob Shell at 4:28 PM

This post is really too informative to us, good perception of images and good description by which any one can get information what they want to this post.......As for as my thinking is concerned this one is the best post.

Thanks for sharing such a informative post.
10mm ammunition

Hi There,
Thank you for sharing the knowledgeable blog with us I hope that you will post many more blog with us:-
10mm Ammo for sale. Full Line of 10mm Ammo. Cheap 10mm Ammunition. 10mm ammo is the powerful semi-automatic handgun cartridges used all over the world.
Email:info@armsgun.com
Click here for more information:- more info