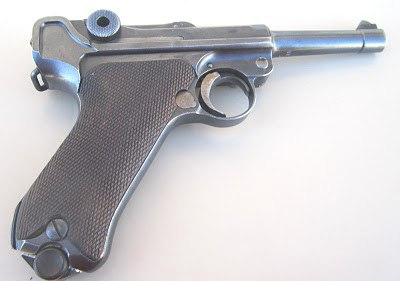 30 Luger
The 1890’s saw some advancement in semi-auto handguns. The 30 Borchardt is considered the first successful semi though the 30 Mauser came out shortly afterwards and lasted a lot longer. The Borchardt was invented by Hugo Borchardt and improved by Georg Luger which became the famous Luger Pistol.

In 1900 the Swiss adopted in it the 30 Luger caliber beating the Germans by several years. Other countries adopted it including Brazil, Bulgaria and Portugal though none use it any longer. A few other pistols chambered this round including the SIG, Walther P-38, Ruger P 89 and the Browning High Power though the Luger was the main gun used for this cartridge. The military round uses a 93 grain FMJ bullet which feeds well but lacks stopping power. The small caliber and non expanding bullet just don’t cut it for self defense. Happily the gun feeds soft and hollow point bullets which enhance it utility considerably. With its good accuracy it should do well in harvesting small game. With hollow point bullets stopping power should be improved. 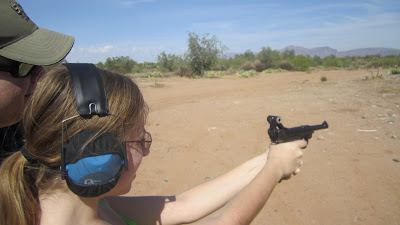 
The cartridge is a 30 caliber bottleneck affair resembling the 30 Mauser round but is shorter and less powerful. Factory bullet weight is usually 93 grains though other weights can be employed. Winchester ammo may be available however the empty cases made by them are usually available. With full metal jacket bullets it isn’t a very good stopper though soft and hollow points can be used. They would make it a decent small game round as accuracy is good and trajectory is fairly flat. Just for fun I decided to try some 86 grain SWC’s by Hornady. I swaged them to 308 diameter as they are originally .313 meant for a 32 revolver. I was pleasantly surprised as they fed without a hitch in the Luger which isn’t known for its ammo tolerance. They along with the 71 grain FMJ should make shooting the Luger less expensive. The 71 grain is also swaged down as it is intended for a 32 auto. I like to see how flexible I can make a gun so I utilized bullets weighting from 60 to 110 grains. The 60 grain is a Hornady HP that was swaged down from 312 to 308 and the 110 is a 30 carbine bullet. This is a small capacity case so you should work up loads very carefully. An amount of powder as small as ¼ grain might make a large difference. 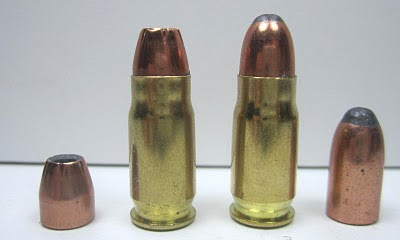 
Shooting the gun is easy as it is relatively light and well balanced. The recoil is entirely manageable while accuracy is good. The trigger pull isn’t too bad for such an old gun. The grip is set at an angle which aids in its point ability. As I usually do when reviewing a gun I get several other people to try it to get different opinions. Most shooters never have an opportunity to hold or shoot one so it is a novel experience as the balance is quite different then most modern guns. That is especially true with the 30 caliber as most Lugers are chambered for the 9 mm. Comments are generally favorable especially when they get used to its novel features. The recoil is mild enough so that we had a 10 year old shooting it with little difficulty.

The most distinctive feature of the Luger is undoubtedly the toggle-lock mechanism, which holds the breech closed by locking in a manner not unlike the human knee, which can sustain a heavy weight when straight, but once bent, is quite easy to continue to bend. This is one feature that was taken from the Borchardt pistol which it replaced. The toggle joint in its straight position resists the rearward force of the detonating cartridge, then "flexes" after enough time has passed. When a round is fired the entire breech, barrel and toggle move straight rearward, on rails, until the toggle begins to ride up on a pair of cams that "breaks" the toggle ,makes it bend at the joint similar to an elbow. Once the toggle joint is no longer straight, it bends freely, allowing the bolt to come rearward, and the striker to be cocked. The spent cartridge is extracted by a combination extractor/loaded chamber indicator on the top of the toggle, and is ejected as the toggle nears the end of its rearward travel, and a new round is stripped from the magazine and chambered as the toggle is driven back to the straight position by a spring. This happens very rapidly and it is difficult to get a picture of the action operating because of this. When there is a cartridge in the chamber the loaded cartridge indicator is slightly raised allowing the shooter to see that the chamber is loaded. The magazine spring is quite strong, requiring some effort to load several rounds. It has a projection sticking out which aids in loading the magazine. To load insert the magazine grasp the curled knobs pull back and release. That should put a round in the chamber. When the magazine is empty the action remains open so the shooter is aware of that fact. If you want to uncock the gun just hold the trigger down and let the action go forward. That saves you from dry firing the pistol though it probably doesn’t hurt to dry fire it occasionally. To me that is important as I never leave my guns cocked. The two position safety works well and is easy to use. 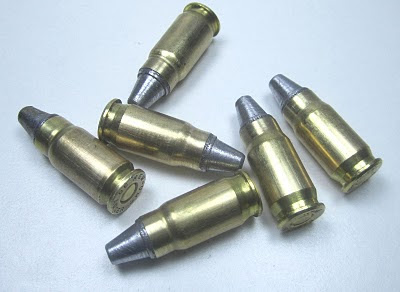 Accuracy is very good in fact I had a new shooter try it and after a couple of close misses on the bullseye proceeded to put a bunch in the center. She said once she got used to the sights and balance hitting was no problem. A 12 year old youth shot it and once she got over her fear did ok. The light recoil and good trigger definitely contribute to the shoot ability of this pistol. The only problem I have with the gun is that the magazine is hard to load. The spring is stiff and after 3 or 4 cartridges are inserted it really gets to be hassle to load.
Ironically the downfall of the Luger was its quality and engineering. It is a complicated gun to make that demands tight tolerances making it difficult to manufacture. For WW ll the Walther replaced it as the front line pistol.
Posted by Bob Shell at 3:32 PM

I just came across your .30 Luger column from 2010. Excellent material. Thanks. I recently acquired a Model 1920 export Luger in 7.65x21. Although in real good condition, it's not really a collector's piece, so I was determined to shoot it. Much to my dismay I discovered the current commercially available ammo (Fiocchi) did not cycle the action, whereas the old manufacture Winchester and Norma stuff worked fine. I got into the reloading thing to try to duplicate the old ammo. Your column has been very helpful.
Jim Gibson