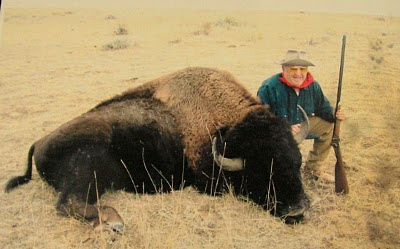 The 45-120
One of the old cartridges that always fascinated me was the 45-120 Sharps. It came out about 1878 in the Sharps rifles. It is the biggest 45 with the case measuring 3 & ¼” in length. All the other 45 caliber rifles from the 45-60 to the 45-110 will chamber in it making it more versatile. It probably came out for buffalo hunting but Sharps went out of business so not many were made. Without a doubt it was chambered in other single shot rifles though not common. Buffalo hunting was done by 1884 after the herds were shot out. With the bison gone there wasn’t much use for such a powerful cartridge. In power it would be adequate for anything in North America and most African game especially with modern loads. 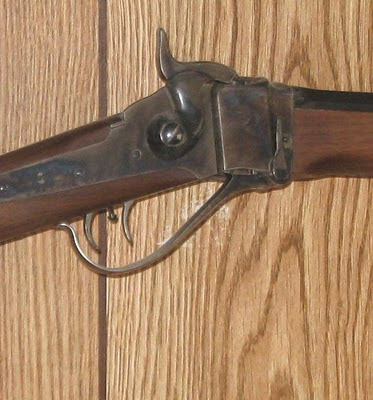 
I finally got a model 73 Sharps from Taylor Company in Winchester Va. It has a 32 inch barrel and double set triggers. It is a heavy and cumbersome rifle but with such a cartridge the size is necessary. It’s a good looking rifle without being fancy. At first I had some trouble with the triggers but a trip to the gunsmith remedied that problem. Now the back trigger sets the front one. It takes a lot of effort to set the front trigger but once set it has a nice pull. The sights are flip up located on the barrel. My intention is to take it buffalo hunting with an old style load. I want to have an accurate load with a 500 grain plus bullet at about 1600 feet per second. That will take down anything I plan on hunting with it. With the strong Sharps action I can undoubtedly exceed the 458 Winchester and even the 458 Lott. The down side is the recoil would be vicious and would be defeating the purpose of the gun. At 1600 feet per second the 535 grain gives plenty of power and recoil. The proper brass can be found at various sources. Norma presently makes it. Good cast bullets can be found at many sources probably some in your local area.

All of the above loads demonstrated consistency giving low spreads between high and low velocity shots. To get an idea of the potential of the 45-120 I took a 458, 45-120 and a 460 Weatherby case. I filled them to the top with 571 ball powder. The idea was to get an idea of capacity as compared to the others. The 458 took 88 grains; the 45-120 allowed 118 grains while the monstrous 460 took 143. With that in mind I would think that it’s reasonable to load the 45-120 up to exceed the 458 and still keep pressures low. Since the rifle has a Sharps action one should be in safe territory doing so. Evan with 458 Lott loads it should be safe. The problem would be recoil. I am not recommending that you attempt this due to many various factors regarding rifle strength and loading techniques. Since I didn’t buy this rifle for killing my shoulder I will forgo those experiments for the time being in fact forever. Also in spite of daily checking there are no T Rexes in my back yard that I have seen. I know of a guy that bought a Ruger # 1 in45-70 and rechambered it for the 45-120 with the express purpose of shooting top loads. I’m glad it’s him and not me behind that particular gun. I wanted to get a 500 grain plus up to 1600 feet per second which I have done. Jacketed bullets from 300 to 400 grains should be practical in this rifle though not necessary. Jacketed bullets are more expensive and not necessary for hunting. If you want to use reduced loads the best way is to use a shorter case. Trying to use reduced loads in the full length case can be an exercise in futility. There is too much air space to deal with most powders. Excess airspace creates inconsistent and possibly dangerous loads. Use a 45-70 case for best results as it is more amendable for reduced loads. You might lose a little accuracy but it will be inconsequential. I have shot some loads utilizing the 45-70 case with complete satisfaction. Another good option would be using 45-90 cases as they are available from Starline and hold enough powder to take care of most tasks that you might encounter. They also sell 45-100 cases just for your info.

A good friend of mine had a chance to go buffalo hunting in Wyoming this fall. Since I was unable to go I talked him into using my rifle rather them a more modern chambering. We did some shooting with various bullets and settled on the 520 grain ahead of 45 X 5744 powder. It gave good accuracy and off he went. Anyway he shot an 1800 Lb bull at 50 yards through the shoulder. He said the bullet broke the near shoulder before going through the heart and breaking a rib on the other side lodging in the hide. He reported that the animal went down instantly and did not move. A modern chambering couldn’t have done any better and in fact most wouldn’t do as well. The recovered bullet weighed 503 grains and mushroomed to about twice its diameter. That’s a 94% weight retention not shabby for an old fashioned cast bullet that went clean through a bison. 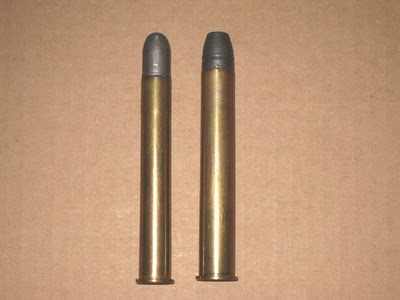 He said there were 12 bulls in the heard and after he shot his bull the rest tried to get it on its feet. After that they seemed to get angry with the hunters and surrounded them, The guide wisely advised everyone to get to the vehicles and get out of the area before things got real ugly. That had to be a weird and scary experience. Anyway it shows that a cartridge that has been around for 120 years can still do the job. It is a well known fact that a slow moving and heavy bullets make good large game rounds. They generally penetrate deeply and cause a lot of damage. After all those sort of rifles nearly decimated the buffalo over 120 years ago not to mention various other species of large game.
Posted by Bob Shell at 4:33 PM

I have a 45-120 Sile Sharps which is proofed for smokeless loads. I currently use a 500 grain cast gas check bullet which is sized and lubed. The powder that I use for hunting is Dupont 4198 with 40 grains it gives a velocity of 1575 Ft per Second. Accuracy is 1-1/2" groups at 100 yards.
Using a MEASURED 100 grains of pyrodex cartridge powder and using the sams 500 gr cast gas check bullet I get 1585 Ft per second and 12 shots gave accuracy at 100 yards which is the best with the horizontal spread of 3/4" and a vertical spread of 7/8". the recoil is extreme but it gives the best accuracy. All of these groups were shot with a 3-9 power scope mounted on the rifle. I use it for deer and Bear. It gives great accuracy and energy out to over 300 yards. If using Pyrodex you must clean the rifle as soon as possible to prevent corrosion. The main reason I like to use smokless powder is the ease of clean up and far less corrosion. I am working on using 300 grain semi jacket bullets and still working on a good load. Excessive air space in the case is the only problem which can be a potential hazard due to inconsistent ignition. If I get the lighter loads worked out I will keep you informed.

Bob, bought a CSA Sharps in .45/120 some years ago, found your site looking for a decent BP load to begin shooting it again. Your 103 grains of 2F Goex, even with the 550 grain bullet I had on hand proved quite promising. Recently, also tried 5744 using a 500 grain bullet over 40 grains of powder. Did Ok, but still looking for that "just right" load with smokeless. My question is this, can I still safely use either a 500 or 550 grain bullet with your recommended 50 grains of 5744 in place of the 535 grain bullet you recommend, or must the charge be lessoned or increased to accommodate the difference in bullet weight? My guess would be no, but would appreciate your input.
Thank you,
John Reiner

Can I just say what a aid to find someone who truly knows what theyre talking about on the internet. You definitely know the way to carry an issue to light and make it important. Extra people need to learn this and understand this aspect of the story. I cant imagine youre not more widespread because you undoubtedly have the gift. online casino

I like the valuable info you have provide on your article, Would like to visit again.
45-70 Bullets for Reloading